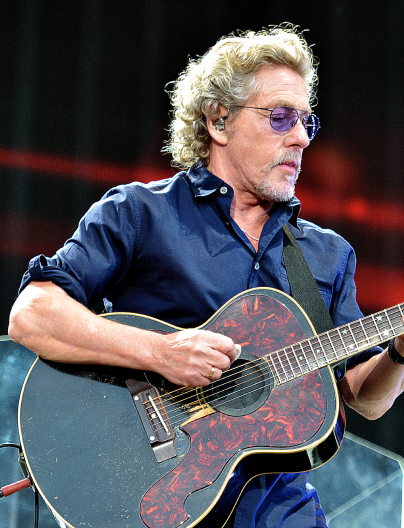 If any one member of The Who can be said to be the group’s founding member it is singer Roger Daltrey, who was born in the West London suburb of Shepherd’s Bush on March 1, 1944. Roger first assembled the group that would become The Who in 1959 while at Acton County School, recruiting John Entwistle and subsequently agreeing to John’s proposal that Pete Townshend should join. In those days Roger, whose daytime job was in a sheet metal factory, even made the band’s guitars, and it was his energy and ambition that drove the group during their formative years. That same energy, coupled with his unwavering resolve, has sustained the group during periods of uncertainty ever since.

Roger’s earliest tastes in music ran to the blues and R&B which formed the set list during their early years as the Detours, as well as Fifties rock’n’roll, which is reflected in his outstanding interpretations of such noted Who covers as ‘Summertime Blues’ and ‘Shakin’ All Over’. In surrendering his leadership of the band to Pete when the latter became the group’s songwriter, Roger became the mouthpiece for Pete’s lyrics and ideas. At the same time he contributed to the group’s sense of showmanship by developing his unique skill at twirling his microphone lead around like a lasso and, by the time of Tommy in 1969, becoming one of rock’s most iconic sex symbols with his golden curls, bare chest and fringed suede coats.

In this respect Roger became Tommy, the deaf dumb and blind boy of Pete’s imagination, and it was therefore only natural that he should assume the role in Ken Russell’s movie adaptation of the rock opera in 1975, for which he received a Golden Globe nomination. This in turn led Roger to develop a concurrent career as a film actor while continuing to sing with the Who. Other film credits over the years include Ken Russell’s Lizstomania, the title role in McVicar, Lightning Jack with Paul Hogan, Teen Agent, and numerous roles in TV dramas. Most recently he appeared in the US CBS TV show C.S.I. – which uses Who songs as theme music – as five separate, differently made-up characters, one of them a middle-aged African-American woman. Other US TV appearances include Lois & Clarke (Superman), Midnight Caller, William Tell, Sliders and Highlander as well as Leprechauns for Celtic Leprechaun Ltd and The Bill, the long running UK TV police drama. He has also narrated a series for the History Channel, undergoing extreme hardships similar to those faced by pioneering settlers in America and elsewhere.

Roger has also cultivated a singing career outside of The Who, beginning in 1973 when he found himself on the BBC’s Top Of The Pops, the UK’s then premier chart TV show, promoting the single ‘Giving It All Away’ which reached number five in the UK charts. It was a track from his first solo album Daltrey, released that same year, which he followed up with the albums Ride A Rock Horse (1975), One Of The Boys (1977), the soundtrack to McVicar (1980), and After The Fire (1985).

Roger has appeared on stage away from The Who on many occasions, and his 1994 solo concert at New York’s Carnegie Hall, with The Juillard Orchestra, was the fastest selling event in the venue’s history. The following year he appeared on stage as The Tin Man in a production of The Wizard Of Oz at The Lincoln Centre, and in 1998 he starred as Scrooge in A Christmas Carol at Madison Square Garden. He has also performed with his friends The Chieftains, the traditional Irish band, and toured the world with the British Rock Symphony interpreting a variety of rock classics.

As well as being one of the original supporters of Nordoff Robbins, The Who have raised many millions for a multitude of charities throughout their career.

Since 2000 Roger has been a patron of the Teenage Cancer Trust, a charity that builds specialised wards for teenagers with cancer in the UK. That year Roger had the idea of setting up the first show at the Royal Albert Hall by ‘The Who & Friends’, with ticket sales and revenue from a DVD and CD raising over £1.2 million, and as a result Roger was given a Humanitarian Award in 2003 from Time magazine. In February 2005, Roger was awarded a CBE by the Queen at Buckingham Palace for his services to music and good causes.

As a member of The Who who were already members of the Rock N Roll Hall of Fame, Daltrey was inducted in 2005 into the UK Music Hall of Fame. In December 2008, he and Pete Townshend were honoured with America’s most prestigious cultural award as recipients of the 31st Annual Kennedy Center Honors in Washington, D.C. by then-President of the United States, George W. Bush. On the 4th  of March 2009, three days after his 65th birthday, Daltrey accepted the James Joyce Award from the Literary and Historical Society of University College Dublin for outstanding success in the music field. On the 12th of March 2011, he received the Steiger Award (Germany) for excellence in music. Daltrey and Pete Townshend received the Classic Album Award for Quadrophenia from the Classic Rock Roll of Honour Awards at the Roundhouse, 9 November 2011, On March 24th, 2011, Roger and his band gave a complete performance of Tommy at a Teenage Cancer Trust show at the Royal Albert Hall, London, supported by imagery which he commissioned from students of Middlesex University. Over the next year, he toured Tommy in the U.S., Europe and Japan.

After playing the legendary Super Bowl in 2010 and closing the Olympics in 2012, The Who continued their charity work by playing a concert in January 2011 to raise money for trials of a new cancer treatment called PDT. Then in December 2012 they played at the Hurricane Sandy Benefit in New York and in January 2014 they played a set to support the Stand Up To Cancer Charity. Ever pursuing his mission to give something back to teenagers, “without whom,” as he said, “we would have no career”, in November 2012 Roger, with Pete Townshend at his side, launched Teen Cancer America. The charity is now established in the USA, with offices in Los Angeles and devoted Teen Cancer units being opened in hospitals all over the U.S.

Between November 2012 and July 2013, The Who toured an arena production of Quadrophenia + More in the U.S. and the UK (with added shows in Paris and Amsterdam) Daltrey directed the staging and visuals of the show himself. The tour received rave reviews from press and fans alike.

In December 2013 Roger recorded an album with Wilko Johnson, guitarist of the legendary British R and B band Dr Feelgood, for release on the revived Chess Label in March 2014. The album charted at number 3 and sold over 150,000 copies in the UK.

In October 2014 The Who embarked on a critical acclaimed UK and U.S. tour to mark their 50th Anniversary which included headlining at Hyde Park and Glastonbury. The tour lasted until May 2016, raising over $500K for Teen Cancer America on the way.

At the end of the tour on May 31st 2016 Roger and The Who played at a benefit in Los Angeles raising $1.5M for Teen Cancer America and an equal amount for an Autism Charity.

In 2016 The Who performed further shows including headlining the Isle of Wight and playing at the Festival in the Desert in October. In 2017 they did a residency at Caesars Palace Las Vegas as well as several other US shows and toured South America for the first time. They still found time for a short UK Tour and performed Tommy at the Royal Albert Hall to benefit the Teenage Cancer Trust.

2018 will see the release of Roger’s autobiography and his first solo album in 26 years.

However busy he is with his solo work and charitable endeavours, the group he formed at a Shepherd’s Bush Youth Club at the age of 16 will always be his first love. Even more than his colleagues, it has been Roger who has done his best to keep The Who’s flag flying during those periods when Pete felt the need to seek creative outlets elsewhere, and the respect he has earned from Who fans as a result is something he cherishes deeply.

This was never more apparent than when, in 1995, Roger took the trouble to generously assemble a band to appear at the first British Who Convention, organised by Who fans for Who fans, at Shepherd’s Bush, the area of London where he was born which has become synonymous with the band. As the ad-hoc group, which included John Entwistle and Pete Townshend’s brother Simon, left the stage, Roger gazed over the sea of faces. “Thank you,” he said, genuinely moved by the occasion. “You’ve given us a wonderful life.”