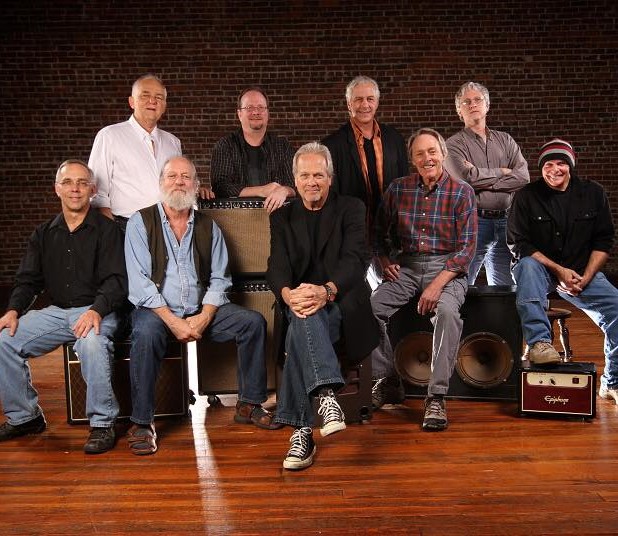 With eight albums selling over two million records and worldwide hits like “Jackie Blue” and “If You Want To Get To Heaven,” the Ozark Mountain Daredevils have come a long way from the Missouri bars and porches where their music was born.

The Ozark Mountain Daredevils have been aptly described as “a ragtag collection of hippies, bohemians and musicians of no fixed ambition.” They have always been indefinable in terms of music genres, producing sounds of country-rock and electric bluegrass all on the same record; writing lyrics both whimsical and poetic, singing harmonies that would send shivers up your spine.

The Daredevils’ formal beginning as a band was in Springfield, Missouri in 1971, and included musicians Larry Lee, Steve Cash, Michael Supe Granda, John Dillon, Buddy Brayfield, and Randle Chowning. In the beginning they called themselves the Family Tree, then Burlap Socks, and then the Emergency Band. But finally, in a nod to Commander Cody who was one of their musical heroes, they settled on the catchy moniker of Cosmic Corncob & His Amazing Ozark Mountain Daredevils—The Ozark Mountain Daredevils, for short.

As fate would have it, acclaimed music producers Glyn Johns and David Anderle heard the band play at the infamous Cowtown Ballroom in Kansas City. Johns and Anderle were on a scouting mission, looking to discover a band with a uniquely American sound. With their diverse influences and wealth of original material, the Daredevils fit the bill. Glyn Johns was particularly intrigued by their harmonies, having recently produced the Eagles’ album, Desperado. And, just like that, based on the recommendations of Johns and Anderle, a recording deal was struck with A&M Records. (Founded by Herb Alpert and Jerry Moss in 1962, A&M Records would become the world’s largest independent recording label with a bevy of disparate acts that in the 1970s included Joe Cocker, Quincy Jones, Joan Baez, Carpenters, Cat Stevens, and Carole King—and the Ozark Mountain Daredevils.)

Johns and Anderle soon made a visit to the Ozarks to help the band choose songs to include on their first album. Then, accompanied by roadies, girlfriends, wives and families, the band members were flown to London, England where they recorded their self-titled debut album, often referred to as the Quilt Album. This critically acclaimed 1973 album spawned their first hit song “If You Wanna Get to Heaven,” written by John Dillon and Steve Cash. Their first recorded album was ranked in the 100 Top Pop Album Artists that year. This first recorded collection of original songs firmly established the Daredevils as one of the most iconic bands of the 1970’s musical era.

After the success of their first album for A&M, record producers Johns and Anderle were determined to guide the Daredevils even deeper into their roots. They had a recording truck delivered from California, set it up on a remote Missouri farm near Bolivar that Randle Chowning rented, called Rudi Valley Ranch, and started rolling the tape. The band, technical crew, and producers literally camped out at the farm for two weeks, recording the tracks that would become their second album, It’ll Shine When It Shines (1974). While they worked on the recording, some songs were written on the spot, such as the much beloved title track, “It’ll Shine When It Shines” and “E. E. Lawson.” With the release of the second album the Daredevils found their way to an even greater number of fans with the number-one hit song “Jackie Blue,” co-written by Larry Lee and Steve Cash.

David Anderle produced their third record in 1975 in Nashville, christened The Car Over the Lake Album. After its release the band embarked on its first European tour where they were enthusiastically received, firmly establishing them as a most popular American band. Upon their return, however, co-founder and guitarist, Randle Chowning, abruptly left the band. In dire need of a guitar player, the band hired Norwegian guitarist, Rune Walle, whom they had met on their recent tour abroad. Although born and raised in Bergen, Norway, Rune was an avid fan of the Daredevils, and already familiar with their material.

This new lineup set the stage for the Daredevils’ fourth album in as many years, the highly acclaimed Men From Earth. With A&M’s Anderle again at the helm the album was recorded at Caribou Ranch, high in the Colorado Rockies above Boulder. Men From Earth became a favorite Daredevils recording, and famous for its iconic cover photo of Roscoe and Clarence Jones, an image by well-known local photographer, Jim Mayfield. The two Ozark mountain men have become emblematic of the band and its history.

In 1976, co-founder Buddy Brayfield left the band to pursue a successful medical career. Brayfield recommended Ruell Chappell be hired to fill the vacancy, so Chappell toured with the Daredevils through 1980, playing keyboards and contributing background vocals on the albums Don’t Look Down in 1977 (also recorded at Caribou Ranch), and It’s Alive in 1978.

After fulfilling their contract with A&M Records, recording six albums plus the packages Greatest Hits and Best Of, the Daredevils signed with Columbia Records in 1980. They recorded one self-titled album for Columbia with veteran producer, John Boylan. At this point in their career, the Daredevils were basically working as a four-piece, using studio musicians to fill in where needed. The Columbia album is beautifully produced and contains many songs collectively co-written by Steve Cash, John Dillon, and Larry Lee. The first cut, “Take You Tonight,” was released as a single, as was the hauntingly lyrical “Oh Darlin,’” written by Larry Lee.

Shortly after the release of the self-titled Columbia album, Larry Lee left the band to pursue a successful writing and producing career in Nashville. After Lee’s departure the band continued to tour and record throughout the 1980s and early ‘90s with good friend and drummer Steve Canaday. Joe Terry, a wonderful singer and one of the most inventive keyboard players around, joined the group and traveled all over the lower 48, Alaska, and Canada playing every conceivable type of venue. After Rune Walle returned to his home in Norway, renowned Springfield musician, Terry Wilson, stepped in to contribute to the Daredevils’ sound with his brilliant guitar playing, both on the road and in the studio. When Wilson departed for film work in Los Angeles, his replacement was the immensely gifted D. Clinton Thompson, who joined the Daredevils for tours of both North America and Europe, as well as for several recording projects. When Thompson left to form his own band, the fabulously infamous Bill Brown stepped in with unbridled energy, bringing his own rocking style to the Daredevils’ live shows. Brown introduced the band to his friend and incredibly talented guitarist, Dave Painter. In 2004, Painter became a full-time member adding his amazing musical skills to the Daredevils’ sound and rich history.

Since their early beginnings in 1971, the Daredevils have released a number of major label and independent record label recordings, traveled millions of miles performing throughout North America and Europe, and they continue to grow and maintain a loyal and dedicated fan base throughout the world. Their songs are regularly played on Classic Radio stations and, of course, songs like “If You Wanna Get To Heaven,” “Jackie Blue,” “Chicken Train,” “Standing On The Rock,” and countless others are still fan favorites across all media. Their current lineup of talented musicians allows the band to perform songs from every corner of their vast catalog, and they continue to delight Dareheads with their live performances. With three of the original co-founders still on board, their signature sound and style remain intact and vibrant. The newest Ozark Mountain Daredevils’ album, Off The Beaten Path (2017), is their first studio recording since 1997.  Co-produced with band member, Nick Sibley, its 16 new songs offer solid proof of their nonstop evolution as songwriters and musicians.