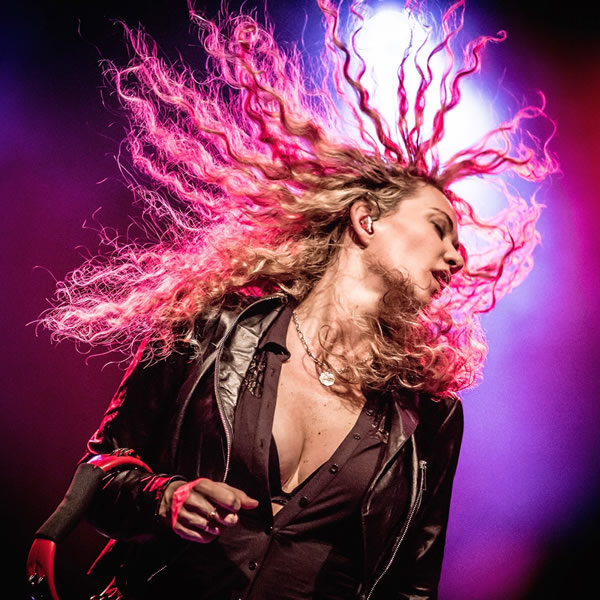 The road has led Dana Fuchs everywhere. But when it came to choosing a location for Songs From The Road, it had to be New York. The singer and the city have history. Almost two decades have passed since Dana left her home in rural Florida and beat a path to the Big Apple. Stepping onto the mean streets of the Lower East Side aged 19, she was an unknown singer with a voice and a dream, ready to slug it out on the city’s bearpit jam-circuit.

Since then, New York has been the backdrop to Dana’s meteoric rise. There were the early buzz-sets in the city’s late-night sweatboxes. The off- Broadway musical Love, Janis, which saw the multi-talented performer play the iconic Janis Joplin. The endless shows and sessions all across town. No wonder, then, that for Songs From The Road, the Highline Ballroom on West 16th Street was the perfect fit – and the singer was received like a local hero.

Released in 2014 on Ruf Records, Songs From The Road is the latest in the German label’s famous series of live albums, with Dana following in the hallowed footsteps of legends including Luther Allison, Jeff Healey and the Royal Southern Brotherhood. As ever, the Songs From The Road concept isn’t about overdubs, Auto-Tune or opulent production, but the honest bottling of the two-way energy that only occurs when great artists go nose-to-nose with their fans. It’s hard to imagine a performer who deserves the treatment more than Dana: a vocalist who means every note, every night.

A live show by the Dana Fuchs Band is an assault on all the senses. As such, comprised in Songs From The Road’s two-disc pack, you’ll find an audio CD capturing the soul power of that classic set on March 14th, 2014, plus a DVD, directed by Kevin Mackall. Prowling the stage, pouring her heart into the microphone and owning every song on the setlist, you won’t question the wisdom of the UK’s Classic Rock Magazine, who famously declared Dana’s once-in-a-generation voice as “juke-joint dirty and illicit, evoking Janis Joplin, Mick Jagger and a cigarette butt bobbing in a glass of bourbon…”

You won’t take your eyes/ears off her, but Songs From The Road is far from a one-woman show. At the Highline Ballroom, Dana’s performance was taken to even greater heights by her stellar cast of players. On guitar and backing vocals, give a big hand to long-time wingman and co-songwriter, Jon Diamond: the former session ace who gave the singer an engine-room shortly after her arrival in New York. Matt Beck (guitars), Jack Daley (bass), Pete Levin (keys) and Joe Daley (drums) provide the thrilling musical canvass, while the so-called Screaming Sirens (aka. Elaine Caswell, Nicki Richards and Bette Sussman) dovetail with Dana’s lead vocal to create a wall of sound that rattles your speakers.

Yet it’s the songs that are the true stars on the night. By this point, three studio albums into their writing partnership, Dana and Jon have amassed a solid-gold back catalogue, and Songs From The Road mines some of their very best nuggets. Long-term fans will be delighted to get reacquainted with Tell Me I’m Not Drinking and Sad Salvation: formative songs that date back to the Dana Fuchs’ Band’s 2003 debut album, Lonely For A Lifetime. Film nuts who caught Dana’s feted turn as Sadie in Julie Taymor’s highly acclaimed Beatles movie, Across The Universe, will adore the closing cover of Don’t Let Me Down.

Those who came onboard with 2011’s Love To Beg, meanwhile, will be thrilled to find cuts from that album including Set It On Fire, Summersong and a cover of Otis Redding’s I’ve Been Loving You Too Long. And of course, the Highline setlist had to have a healthy smattering from 2013’s Bliss Avenue: the career-best third album that Dana once noted “really purged my soul in a starker, more naked way, both lyrically and musically”. You won’t dispute that after hearing the band’s powerhouse live readings of those classic songs, which include Livin’ On Sunday, Handful Too Many, So Hard To Move and Vagabond Wind.

Since the noisy birth of rock ‘n’ roll, New York has hosted hundreds of were-you-there concerts by a roll-call of favourite sons, from The Ramones at CBGBs to The Velvet Underground at The Factory. Now, with Songs From The Road, Dana Fuchs has chalked up another entry in the NYC annals and staked her claim as the city’s most exciting adopted daughter. So start spreading the news. You’ll want to be a part of it…