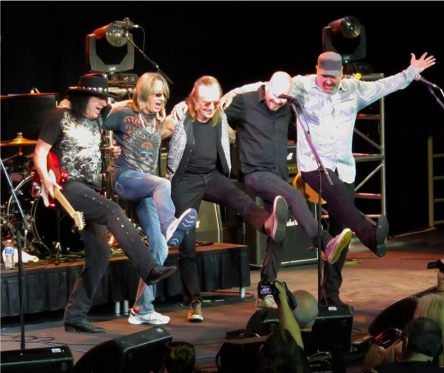 About Earl & The Agitators

That’s what the “EARL & THE AGITATORS ALL STAR BAND featuring Scott Holt” is all about. A collective of veteran musicians (all named Earl by the way) from assorted Rock & Blues bands who joined together in 2015 to create some great music and have waaay too much fun!

Scott Holt began his professional musical journey at 19 when he met and was mentored by his friend BUDDY GUY and he spent the next 10 years playing guitar for the Grammy winning legend. Scott’s tenure with Buddy Guy established him as an incredible guitarist, a rich, soulful singer, performer and storyteller in his own right. And any time Buddy and Scott are in the same area, Buddy always invites his friend up to play and it is something to see!

Then in 2015, at Dark Horse Institute in Franklin, Tennessee, Scott (Earl #1) had the chance to write and record with his good friends Roger Earl (Earl #4), and Bryan Bassett (Earl #2), of the legendary rock band FOGHAT! They threw Foghat bassist Rodney O’Quinn (Earl #3) into the fray and gave birth to the “EARL & THE AGITATORS ALL STAR BAND featuring Scott Holt”.

EATA released a four song EP in 2016 and made their debut on the Rock Legends IV Cruise in January 24, 2016 where they were joined by veteran New Lords guitarist Tony Bullard (Earl #5) formerly of the JIMMIE VAN ZANT BAND & BLACK OAK ARKANSAS and the guys have been burning up stages and ringing ears together ever since! Their live show is an incredible musical smorgasbord of incredible talent and just plain fun!

A unique highlight of EATA is the array of “special guest” performers (“Earl’s”) who rotate in and out, lending their talents to this all-star band. You never know who might show up to tear up the stage with Scott, but these guys know what it takes to make an audience get up and boogie!

“EARL & THE AGITATORS ALL STAR BAND featuring Scott Holt” are currently working on their new full length album called ‘Shaken & Stirred’. It is certain to rock your socks off!!

So, put on your ‘Hi Heel Sneakers’ and come along for the ride with “EARL & THE AGITATORS”.

Just be seriously ready for a good time!