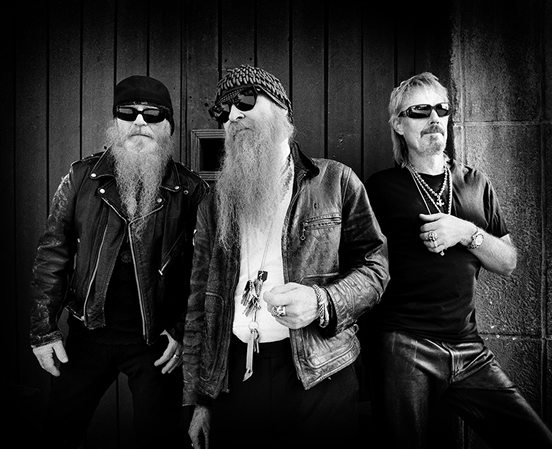 This sturdy American blues-rock trio from Texas consists of Billy Gibbons (guitar), Dusty Hill (bass), and Frank Beard (drums). ZZ Top plays red-hot Texas boogie and blues, and no one does it better – or has done it longer – than this “little ol’ band from Texas.” The trio’s enduring appeal owes much to their mastery of and feel for rootsy forms. Guitarist Billy Gibbons, bassist Dusty Hill and drummer Frank Beard were influenced by such blues masters as Freddie King, Lightnin’ Hopkins, Muddy Waters and John Lee Hooker. From the beginning they took a hard-rocking power-trio approach to the blues, cultivating a new audience for it in the Seventies and Eighties with superior musicianship as well as attitude, style and some devilishly funny songs.

The genius of ZZ Top is that they’re reverential about the blues but loose and funny about the subject matter of their songs. Their songs are laden with pop-culture references, sexual double entendres and the determined pursuit of a good time. They have written about fast cars, fishnet stockings, sharp clothes, TV dinners, cheap sunglasses and “tush.” They visually connected with the MTV generation by virtue of Hill’s and Gibbons’ long beards and fur-lined guitars. For many, ZZ Top have been the premiere party band on the planet. Certainly, they have been Texas’s foremost cultural ambassadors.

ZZ Top formed in 1969 as Gibbons’ psychedelic blues band, the Moving Sidewalks (who released one album, Flash), was coming apart. He hooked up with Beard and Hill, who’d played in American Blues (which cut a pair of albums). The trio bonded around a shared love of basic blues, boogie, rock and all things Texas-related. ZZ Top played its first show in February 1970. Their lean, driving approach helped launch the Seventies on its hard-rocking course. They brought rootsy vigor to the music scene, surviving over the decades by demonstrating an ability to adapt and evolve without radically altering the foundations of their sound.

ZZ Top signed to London Records – home of the Rolling Stones and John Mayall, a plus in the group’s eyes. Their earliest albums – ZZ Top’s First Album (1970) and Rio Grande Mud (1971) – staked out their bluesy, no-frills territory and gave them a chart hit, “Francene.” ZZ Top solidified their sound on Tres Hombres (1973) by recording in Memphis. Musically, the union of Texas blues and Memphis soul became a hallmark of ZZ Top. Tres Hombres’ key track, “La Grange,” was a growling boogie about the same place celebrated in The Best Little Whorehouse in Texas.

The band built a word-of-mouth fan base on the road, and nonstop touring in turn propelled record sales. Tres Hombres reached #8 and became the first in an unbroken string of eleven gold and platinum albums. The next two albums – Fandango! (1975) and Tejas (1977) – hit #10 and #17, respectively. Fandango! yielded the hard-driving “Tush,” which became ZZ Top’s first Top 40 single.

ZZ Top carried stagecraft to elaborate heights with its Worldwide Texas Tour: Taking Texas to the People. For this mid-Seventies extravaganza, which came between Fandango! and Tejas, ZZ Top lugged 75 tons of equipment and animals native to Texas, including a buffalo, a longhorn steer, buzzards and rattlesnakes. They also performed on a Texas-shaped stage. Afterward, an exhausted ZZ Top took an extended hiatus. Three years later they returned on a different label (Warner Bros.) with a fiery new album, Deguello (1979) filled with instant classics: “Cheap Sunglasses,” “Fool for Your Stockings,” “I’m Bad, I’m Nationwide,” and their remake of Sam and Dave’s “I Thank You.” El Loco (1981) yielded another naughty anthem (“Tube Snake Boogie”) and poised them for a phenomenal explosion in popularity.

In the Eighties, ZZ Top discovered synthesizers, and MTV discovered ZZ Top. The group’s bluesy, irreverent approach to synths appealed to fans of rock, blues, boogie, disco, and New Wave alike. Eliminator, whose title and cover were inspired by Gibbons’ hot-rodded ’34 Ford coupe, became one of the biggest albums of the decade, selling more than 10 million copies. Three of its songs – “Gimme All Your Lovin’” (#37), “Sharp Dressed Man” and “Legs” (#8) – were radio, video and club hits. With its leggy, model-strewn video, “Legs” remains the biggest single of ZZ Top’s career.

From the release of Eliminator in 1983 until Greatest Hits dropped off the charts ten years later, ZZ Top were international superstars. The group followed Eliminator with Afterburner (1985), which yielded four Top Forty hits: “Sleeping Bag” (#8), “Stages” (#23), “Rough Boy” (#22) and “Velcro Fly” (#35). The trade magazine Pollstar declared ZZ Top the top touring act of 1986. Recycler (1990) completed the trilogy that had commenced with Eliminator and several instant classics – “Give It Up,” “Doubleback,” “My Head’s in Mississippi” – to the repertoire. Of the title Recycler, Gibbons remarked, “We’ve been reinventing ourselves for quite awhile; in our own way, we’ve made every effort to preserve our precious rock and roll environment.” The Afterburner tour marked another tour pinnacle, offering cosmic blues and boogie from a Disney-designed stage strewn with futuristic props.

The group’s love of the blues went beyond their own music, as they began raising money in 1988 for a proposed Delta Blues Museum in Clarksdale, Mississippi. In July 1992, ZZ Top announced that they were moving from Warner Bros. to RCA. They’ve since recorded four more albums – Antenna (1993), Rhythmeen (1996), XXX (1999) and Mescalero (2003) – and to this day they remain one of rock’s most entertaining live acts. On March 15th, 2004 ZZ Top’s contribution to the development and perpetuation of rock and roll was acknowledged when they were inducted into the Rock and Roll Hall of Fame. After three and a half decades, the “little ol’ band from Texas” just keeps rolling.