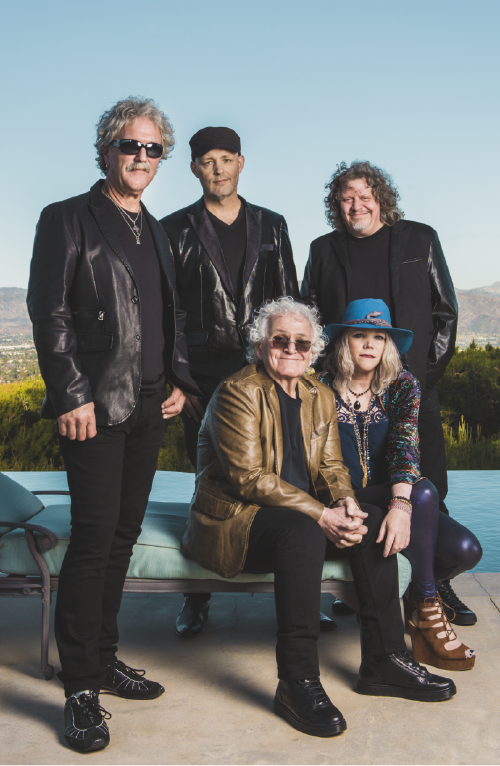 The legend of Jefferson Starship begins in 1970, when Paul Kantner released an album titled BLOWS AGAINST THE EMPIRE under the artist name “Paul Kantner and the Jefferson Starship”. The story, however, begins with the coalescence of the band Jefferson Starship itself, in 1974. That collection of talent included John Barbata, Craig Chaquico, Papa John Creach, David Freiberg, Paul Kantner, Peter Kaukonen, and Grace Slick. They first toured as Jefferson Starship in 1974, and released the album, DRAGON FLY which was certified gold in 1975. Kaukonen departed the lineup after that initial tour and the remaining members welcomed Pete Sears on bass. Shortly thereafter, Marty Balin joined the Jefferson Starship lineup. Balin had co-founded Jefferson Airplane with Paul Kantner, and the Airplane roster also included Grace Slick, David Freiberg, and Papa John Creach at various points during that band’s existence. Balin’s addition to the Jefferson Starship lineup resulted in a reunion of sorts for all those players under a new banner. The new collection of personnel returned to the studio to record RED OCTOPUS, which was released in June of 1975. The record reached #1, propelled by the success of the hit singles, Miracles and Play on Love. It has sold over two million copies. Papa John Creach quietly left the band after this whirlwind success. Jefferson Starship’s hit-making streak continued with 1976’s SPITFIRE, which featured the hit, With Your Love, and 1978’s EARTH, powered by the hits, Count on Me and Runaway.

The band evolved again in 1979. Marty Balin and Grace Slick departed by choice, and John Barbata had to leave due to a serious car accident. Mickey Thomas stepped in on lead vocals and Aynsley Dunbar picked up the sticks. This latest incarnation of Jefferson Starship produced the band’s fifth consecutive hit record, FREEDOM AT POINT ZERO, thrust to gold status by the hit single Jane. MODERN TIMES followed in 1980, finding its way to gold certification on the wings of hit single Find Your Way Back, which appropriately described Grace Slick, who sang background on the album and returned to tour with the band in 1981. In 1982, Aynsley Dunbar left the group, and Donny Baldwin assumed drum duties. The band’s 1982 release WINDS OF CHANGE would also produce two top 40 hits, Be My Lady and Winds of Change. 1984’s NUCLEAR FURNITURE kept the band’s streak alive, planting No Way Out on the top 40 and selling over 500,000 records.

In 1992, Kantner returned to touring life and revived the name “Jefferson Starship”. True to its legacy, the members have changed over time, but the heart and the magic of all those hits remain. Paul Kantner died in 2016.