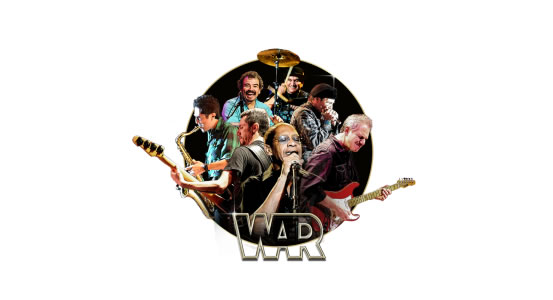 What do you get when you take Funk, Jazz, R&B and Rock & Roll and mix it all together? Well, you get one of the greatest bands of all time; WAR has sold more than 50 million albums worldwide. Lonnie Jordan, original lead singer, keyboardist extraordinaire and musical director has always been the voice of WAR and is one of the most versatile and musically talented men of the twentieth century. His powerful voice presides over WAR’s political, historical and downright fun songbook. Whether listening to “Lowrider” on “Grand Theft Auto San Andreas” or on classic vinyl, WAR’s music is a timeless thread in the quilt of American pop culture.

WAR is not a band. WAR is a Movement!

In 1969, Eric Burdon and WAR recorded and released their first album entitled “Eric Burdon Declares WAR” featuring the number one single, “Spill The Wine.” Following its release, Eric Burdon and WAR embarked on an extensive tour of Europe and the UK recognize by England’s New Musical Express (1969) as “The best live act I ever saw”.

On September 16, 1970 Jimi Hendrix joined Eric Burdon and WAR for a jam session at London’s Famous Ronny Scotts Jazz Club. Unfortunately, this would be Jimi’s last jam session as he passed away later that night. Stunned and devastated by the death of his friend Jimi Hendrix, Eric Burdon made the heavy hearted decision to leave the band and return to Los Angeles. WAR continued their European tour without their former front man before returning to the states.

Following Burdon’s departure, WAR’s career skyrocketed. In the early 1970’s the release of “Slippin’ into Darkness” and “Me and Baby Brother” represented their exhilarating sound and spoke to millions of Americans about the troubled times of Vietnam, Watergate and the ethnic tension that centered around inner cities. Then, in 1972 WAR released The World Is a Ghetto. Its second single, “The Cisco Kid,” shipped gold and the album attained the number one spot as Billboard magazine’s Album of the Year.

Over the last few years WAR has been quite busy. A partial listing includes:

WAR has had a profound influence on contemporary American music and has been embraced by media around the world. A brief highlight of their extensive discography follows:

To date, WAR has sold nearly 50 million records and performs for 1,000,000 people a year. In addition, WAR has been honored with 17 gold, platinum and multi-platinum awards. These include: triple platinum The World Is A Ghetto, multi-platinum Why Can’t We Be Friends? All Day Music, and Deliver the World, and gold singles from their Quad platinum Greatest Hits Album.  Also, “Summer,” their single from WAR’s Greatest Hits Live album sold gold and set a new record as the first single from any greatest hits package to become a hit. Today, WAR is a permanent part of America’s pop cultural landscape and has profoundly impacted the music industry.

Currently, when WAR is not on tour, they can be found in the studio working on their first CD of new material in over 14 years, scheduled to be released in early 2013.

WAR Hit Songs
All Day Music
Slippin’ Into Darkness
World is a Ghetto
The Cisco Kid
Gypsy Man
Me and Baby Brother
Low Rider
Why Can’t We Be Friends?
Summer
Galaxy
You Got the Power
Don’t Let No One Get You Down
Spill the Wine
Tobacco Road