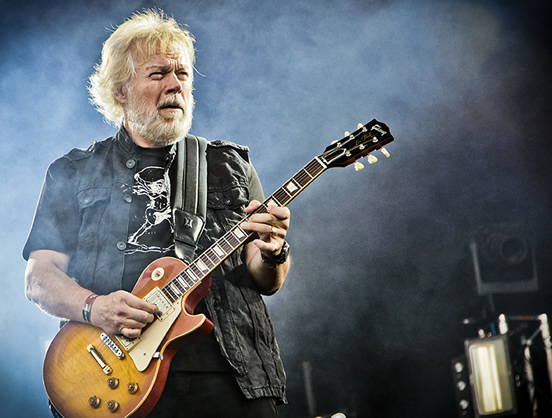 Few artists can claim to have made a bigger impact on popular music than Randy Bachman, widely regarded as  the “architect of Canadian rock n’ roll.”  His list of unforgettable anthems turned pop‐culture touchstones includes such hits as “You Ain’t Seen Nothing Yet,” “Taking Care of Business,” “Looking Out for #1” and “Let It Ride” for Bachman‐Turner Overdrive; and “American Woman,” “No Sugar Tonight,” “Undun” and “These Eyes” with The Guess Who.

Since his first hit in 1965 with “Shaking All Over,” Bachman has sold over 40 million records and earned over 120 gold and platinum album/singles awards around the world for performing and producing, and his songwriting has garnered him the coveted #1 spot on radio playlists in over 20 countries.  He remains the only one of his countrymen to have been inducted twice into the Canadian Music Hall of Fame.

On April 14, Randy Bachman, under the moniker BACHMAN, will unveil his debut album, Heavy Blues, with a raw, bruising sound inspired by the British blues of the 1960s, tinged with a strong contemporary vibe. There’s an immediacy and toughness to Heavy Blues that’s impossible to ignore. At the same time, Bachman’s songwriting craftsmanship shines through thick, fuzzy coats of distortion.

With Heavy Blues, Bachman decided to take a risk at the urging of old pal Young.

“I had a conversation at the Musicians Hall of Fame induction with Neil, who said, ‘If you’re getting a new record deal, don’t make the same old music and call it new. Reinvent yourself, your writing, your sound and get out of the box – time to be fierce, ferocious and afraid. Scare yourself by getting out of your safety zone.”

Hungry for a new musical adventure, Bachman hit on the idea of doing a blues album, something he’d started with long‐time partner Fred Turner but had never finished.

Enlisting Ruddick and Brendon in this new project, Bachman was determined to step out on a limb. So he made another difficult decision, going with an outside producer – a rarity for Bachman. On the recommendation of Joe Bonamassa, Bachman chose famed rock producer Kevin Shirley, who didn’t make things easy on him.

Known as “The Caveman,” Shirley is one of the hottest producers in rock, having worked with artists such as Rush, The Black Crowes, Iron Maiden, Journey and Led Zeppelin, to name a few. In great demand for his studio acumen, Shirley carved out a small window of opportunity between projects to work with Bachman.

“Kevin pushed me past my stop sign and pulled me down a road I never would have gone before, because I’d produced myself for so long,” said Bachman. “I thank him for remodeling me.”

Shirley advised Bachman to keep things simple. “I had written so many songs,” said Bachman, “and Kevin Shirley would say to me, ‘This is really great, but it’s got 12 chords. Take out 10 of them and make it a two‐chord song.'”

Though Bachman protested that doing so would radically change these songs, he went along with Shirley’s suggestions, and the results are gritty and powerful.

“In removing some of the chords, it changed the vocals I was singing and made them more bluesy,” said Bachman. “It took me to a new simplistic platform, which we all loved the power of when we glued our parts together.”

The result was a more tribal feel, according to Bachman. The chemistry proved equally solid with Ruddick and Brendon, who shared Bachman’s appreciation for the hard‐edged blues/rock sound.

“When we got together, this thing happened.  It burst into flames,” said Bachman.  “It was an instant combustion. When I got the elements together, it just exploded.”

Such is the nature of this fiery collaboration, one that’s produced such forceful and compelling listens as “Oh My Lord,” “The Edge” and a deeply satisfying title track – all containing the thumbprints from the rock icon’s past glories. “There’s never a rest in these songs,” said Bachman.

What’s more, the songs of Heavy Blues all surge with raw emotions arising from personal tumult.

“They’re all personal, because I wrote them while going through tremendous personal crises over the last five or six years,” said Bachman. “My marriage broke down.  A revolution occurred in my life: a new home, a new band, a new record deal ‐ so this is about change and karmic circles.”

Touchstones such as Cream’s Wheels of Fire and Jimi Hendrix’s Are You Experienced? provide contextual clues as to Heavy Blues’s style. With the guest guitarists each contributing their own unique guitar licks to various tracks, all written by Bachman, the project evolved into a collection of “heroes and friends”, even including a posthumous appearance from Healey:

“I had recorded live with Jeff Healey several years before he passed away,” said Bachman. “I remember what a dear friend he was and missed him and thought how he’d like to be on this album. I asked his widow Crystie and she said she’d be proud and so would Jeff to be a part of this. So I found a song we did years ago in the same key and tempo as one of mine and Jeff’s solo fit perfectly into “Confessin’ to the Devil.”

In the end, Heavy Blues should surprise and delight loyal fans, while also attracting a new, younger audience that revels in the stripped‐down blues of the Black Keys and the White Stripes.

“This project took on a life of its own and is still growing,” said Bachman. “I was barely in control once it started. I started the engine and then went along for the ride. It was the most instant project I’ve ever worked on.”