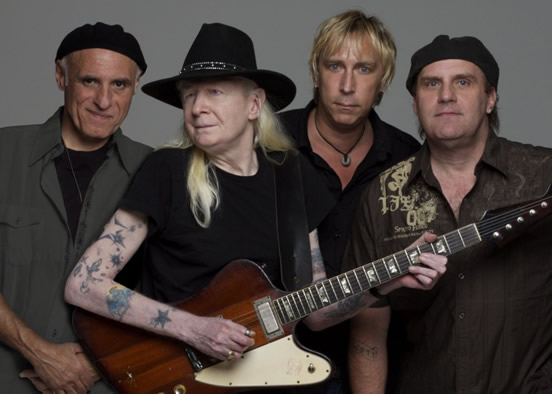 Johnny Winter has been a guitar hero without equal. Signing to Columbia records in 1969 called largest solo artist deal of it’s time, Johnny immediately laid out the blueprint for his fresh take on classic blues a prime combination for the legions of fans just discovering the blues via the likes of Jimmy Page and Eric Clapton. Constantly shifting between simple country blues in the vein of Robert Johnson, to all-out electric slide guitar blues-rock, – Johnny has always been one of the most respected singers and guitar players in rock and the clear link between British blues-rock and American Southern rock (a la the Allman Brothers and Lynyrd Skynyrd.) Throughout the ’70s and ’80s, Johnny was the unofficial torch-bearer for the blues, championing and aiding the careers of his idols like Muddy Waters and John Lee Hooker.

Growing up in rough-and-tumble town populated by oilfield wildcatters and shipyard workers, he spent long hours listening to a local deejay named J.P. Richardson – The Big Bopper of “Chantilly Lace” fame – and became hooked on 50’s rock & roll. He formed his first band, Johnny and the Jammers, in 1959 at the age of 15, with his 12-year-old brother Edgar on keyboards. Racial tensions in Beaumont were still high in those days. The town had been side to one of the worst race riots in Texas history just nine months before Johnny’s birth. Mobs wandered the streets, businesses burned, martial law went into effect, and more than 2,000 uniformed National Guardsmen and Texas Rangers sealed off the town from the rest of the world until tempers cooled. Despite the brutal legacy, Johnny remembers never hesitating as a kid to venture into black neighborhoods to hear and play music. Looking back, he believes people in the black community knew that he was sincere, that he was genuinely possessed by the blues. “Nothing ever happened tome. I went to black clubs all the time, and nobody ever bothered me. I always felt welcome.” He also became friends with Clarence Garlow, a deejay at the black radio station KJET in Beaumont. Who opened Winter’s eye’s and ears to rural blues and Cajun music. Clarence, who recorded for the swamp boogie specialty label Goldband, KRCO, Frolic, Diamond, Moon-Lite, Hall-Way and other regional labels.

There’s a famous story about a time in 1962 when Johnny and his brother went to see B.B. King at a Beaumont club called the Raven. The only whites in the crowd, they no doubt stood out. But Johnny already had his chops down and wanted to play with the revered B.B.”I was about 17,” Johnny remembers, “and B.B. didn’t want to let me on stage at first. He asked me for a union card, and I had one. Also, I kept sending people over to ask him to let me play. Finally, he decided that there enough people who wanted to hear me that, no matter if I was good or not, it would be worth it to let me on stage. He gave me his guitar and let me play. I got a standing ovation, and he took his guitar back!”

Winter’s big breakthrough came a few years later in 1968 when Rolling Stone writers Larry Sepulvado and John Burks featured him in a piece on the Texas Music scene, which prompted a bidding war among labels that Columbia eventually won.  Johnny’s self-titled 1969 disc announced loudly that there was a new guitar-slinger on the new national scene. The disc included audacious covers such blues classics as B.B. King’s “Be Careful with a Fool,” Sonny Boy Williamson II’s “Good Morning Little School Girl,” Robert Johnson’s “When You Got a Good Friend” and fellow Texan Lightin’ Hopkins’ “Back Door Friend.” It also featured two prime original Winter songs, “Dallas”and the controversial “I’m Yours and I’m Hers,” that went into heavy rotation on FM underground radio. The album peaked at No.24 on the billboard chart and was promptly followed by Second Winter later that same year.

Looking back, writer Cub Koda described the period as one when “Straight out of Texas with a hot trio, Winter made blues-rock music for the angels.” That trio, by the way, included bassist Tommy Shannon who would go on to be part of SRV’s Double Trouble and drummer Uncle John Turner. Winter stayed with Columbia and it’s boutique Blue Sky label for more than a decade, turning out such well-received platters as “Johnny Winter And” (1970), “Still Alive and Well” (1973) and “John Dawson Winter III” (1974). He also helped to introduce blues giant Muddy Waters to another generation of listeners by producing and playing guitar on the Grammy-winning “Hard Again” (1977), as well as the Grammy-nominated “I’m Ready” (1978), Muddy “Mississippi Waters Live” (1979) and “King Bee” (1981). The collaborations were so successful that Waters took to referring to Johnny as his “adopted son”!

Johnny joined Alligator Records in 1984. His desire to record nothing but authentic blues made for a perfect fit. When Johnny released Guitar Slinger later that year, it was widely hailed as his best (and bluesiest) album ever; it charted in both Billboard and Cashbox as well as earning a Grammy nomination. The next year, Johnny followed up Guitar Slinger with Serious Business. The powerhouse album won Johnny his second Grammy nomination with Alligator Records. Third Degree, his final Alligator release, came out in 1986. The album featured several special guests and an array of blues styles. Original blues cohorts, Tommy Shannon and Uncle John “Red” Turner, as well as Mac “Dr. John” Rebennack, all made guest appearances. Johnny also played two solo acoustic cuts on the National Steel guitar (the first time he’d played the National in the studio since 1977).

Johnny was living his artistic dream, recording nothing but pure blues.His Alligator albums earned their way onto rock radio and a video for the song Don’t Take Advantage of Me played on the fledgling MTV network for over six months. But no matter how much commercial success Johnny’s Alligator albums received, they never compromised his commitment to his roots.

Today Johnny Winter is enjoying an unparalleled resurgence performing to sold out shows worldwide even after a long life full of honors and accomplishments such as a triumphant appearance at Eric Clapton’s Crossroads Festival with Derek Trucks, Buddy Guy and Clapton that has been immortalized on the Emmy award winning DVD. In a ceremony with Slash presenting in Nashville, Gibson Guitars released the signature Johnny Winter Firebird guitar that has been his beloved trademark for years. A Live through the 70s DVD is a hit along with his Live Bootleg Series CDs that have all entered the Top 10 Billboard Blues charts. Two unique instructional DVDs have been produced by Cherry Lane/Hal Leonard to the gratitude of players around the world. Always one for special appearances he recently performed with the Allman Brothers at the Beacon Theater in Manhattan on the 40th anniversary of their debut.

His recent Grammy nominated I’m A Bluesman disc on Virgin/EMI, has only added to his Texas-sized reputation. Joining him on this CD are guitarist Paul Nelson, bassist Scott Spray, 2 members of his current scorching road-tested touring band also consisting of drummer Vito Liuzzi. Performing now with a renewed vigor and fire to say that he is “back” would be an understatement. In fact, he never left. He
is just better than ever.

1953 – 1959
Johnny begins playing clarinet at age five; switches to ukulele and then guitar a few years later. Performing with his younger brother Edgar as a duo in an Everly Brothers vein, the Winters win a talent contest and appear on local television shows.

1959
The Winter brothers travel to New York to audition for Ted Mack’s Original Amateur Hour. Soon thereafter, they receive their first taste of rock ‘n’ roll. The Winter brothers gain regional notoriety with the singles “School Day Blues” and “You Know I Love You” released on Houston-based Dart Records. During this time Johnny begins frequenting all black blues clubs and over the years he sits in with such heroes as Muddy Waters, BB King, and Bobby Bland.

1962
At age 14, Johnny forms his first band, Johnny and the Jammers, with Edgar on piano.

1962 – 1965
Johnny cuts singles as a leader and sideman for regional labels such as Kroc, Frolic, Diamond, Goldband, Jin, and Todd. In 1963, he moves to Chicago to check out the blues scene but winds up playing twist clubs. He returns to Beaumont and records “Eternally,” a pop flavored number with horn arrangements by Edgar. The single is licensed by Atlantic Records and becomes a hit in the Texas/Louisiana region.

1965 – 1967
Johnny gigs relentlessly throughout the deep South, both with his own band (alternately known as The Cyrstaliers and It and Them) and in a band with Edgar (Black Plague).

1967
After two and a half years of barnstorming, Johnny settles in Houston.

1988
The Winter of ‘88 on the MCA-distributed Voyager label shows Winter experimenting with a more contemporary flavored sound. Johnny is inducted into the Blues Foundation Hall of Fame.

1991
Winter returns to his blues roots with a vengeance. His Grammy-nominated Let Me In marks a powerful debut on the Pointblank label. This CD boasted guest appearances by Dr. John and Albert Collins. Produced by Dick Shurman, the disc featured the memorable “Illustrated Man,” a song by the Nashville team of Fred James and Mary-Ann Brandon chronicling Johnny’s well-tattooed torso. Other tracks include Winter’s own title tune and his equally stand-out “If You Got a Good Woman,” as well as Dr. John’s “You Lie Too Much” with the good doctor on ivories.

1998
Live in New York City ‘97, Winter’s third Pointblank record, offers a scorching collection of concert favorites. The first album of new Winter material in five years. Live in NYC ‘97 was recorded at New York’s Bottom Line in April 1997. The songs were selected by members of Winter’s fan club. The entire album is intended as a gesture of gratitude by Winter to his many fans worldwide.

2005 – Today
Johnny and Edgar Winter inducted into the Southeast Texas “Walk of Fame” at Ford Park in their home town of Beaumont, Texas for their contributions to music and career accomplishments.

The future
The Texas guitar tradition runs deep. A gutsy school of blues playing, marked by thick tones, aggressive attack and tons of technique, all delivered in a flamboyant, swaggering style that is endemic to the Lone Star State. From T-Bone Walker and Clarence Gatemouth Brown on through Albert Collins and Freddie King, Billy Gibbons and the late Stevie Ray Vaughan, the tradition of the Texas guitar slinger has lived on. The one name that ranks at the top of that exclusive list is Johnny Winter, an international ambassador for rocking Texas blues and still going strong!