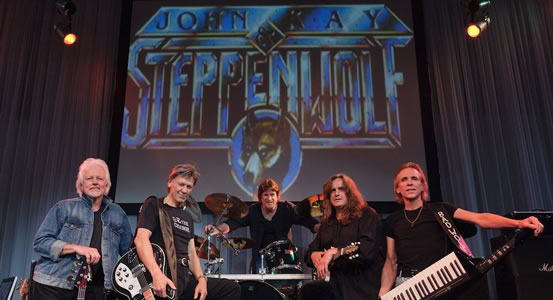 In the chaotic world of rock ‘n’ roll, in which the lifespan of most bands can be measured in terms of a few years or a few months, John Kay and Steppenwolf have emerged as one of rock’s most enduring and respected bands, delivering hard-hitting, personally-charged music for more than three decades.

In the late 1960s, Steppenwolf embodied that era’s social, political and philosophical restlessness, building an impressive body of edgy, uncompromising rock ‘n’ roll that retains its emotional resonance more than three decades after the band’s formation. Such Steppenwolf standards as “Born to Be Wild,” “Magic Carpet Ride,” “Rock Me” and “Monster” stand amongst Rock’s most indelible anthems.

At last count, the band’s worldwide record sales exceed 25 million units. Its songs remain fixtures on classic-rock radio, and have been licensed for use in approximately 50 motion pictures and an even greater number of television programs. And, in addition to being the first band to use the term “heavy metal” in a song (in “Born to Be Wild”), Steppenwolf’s punchy style helped to establish the fundamentals of the hard-rock sound that would flourish in the 1970’s.

Steppenwolf’s remarkable resilience is largely a reflection of the fierce determination and never-say-die tenacity that’s driven Kay for much of his life. He was born Joachim Fritz Krauledat in 1944 in the section of Germany then known as East Prussia. He never knew his father, who was killed fighting in Russia a month before John’s birth. When John was less than a year old, he and his mother fled to what would soon become Communist-controlled East Germany. When he was four, they undertook a perilous midnight escape into West Germany.

Growing up in Hannover, West Germany, John was profoundly affected by the American rock ‘n’ roll he heard on U.S. Armed Forces Radio. Though he didn’t speak English at the time, the music’s primal energy touched something deep in him, instilling both a driving ideal of personal freedom and an abiding interest in American culture. That vision became a reality in 1958, when the teenager emigrated with his mother and stepfather to Toronto. There, he immersed himself in the rock, R&B, country and gospel music that emanated from late-night U.S. clear-channel AM stations, while learning English from the speed-rapping DJs who dominated the rock ‘n’ roll airwaves.

By 1967, The Sparrow had run its course and Kay was back in Los Angeles, where ABC-Dunhill Records staff producer Gabriel Mekler encouraged him to form a new group to record for his label. Towards that end, the singer reenlisted two old Sparrow band mates, drummer Jerry Edmonton and keyboardist Goldy McJohn, and recruited 17-year-old guitar prodigy Michael Monarch and bassist Rushton Moreve. The new outfit was christened Steppenwolf, after Hermann Hesse’s mystical novel of the same name.

Steppenwolf’s self-titled 1968 debut album-recorded in a mere four days-introduced the band’s iconoclastic approach, which combined a tough, blues-rooted sound, a penchant for topical lyrics and the gritty growl of Kay, whose brooding presence and trademark shades made him one of the era’s most magnetic and identifiable figures.

Steppenwolf soon emerged as one of the few bands of the late ’60s to successfully straddle the pop-oriented AM mainstream and the hip FM underground, scoring substantial success on both the single and album charts without tailoring its approach to pander to either constituency. “Born to Be Wild”-written by ex-Sparrow member Dennis Edmonton, aka Mars Bonfire-became Steppenwolf’s first major hit, and was subsequently featured prominently (along with the band’s pointed reading of Hoyt Axton’s anti-hard-drug composition “The Pusher”) in the seminal ’60s film Easy Rider, cementing Steppenwolf’s status as counterculture icons as well as earning the group a hardcore biker following.

“For the times, Steppenwolf was an uncharacteristically tight band,” Kay notes. “In San Francisco, The Sparrow had been allowed to stretch out and experiment. But when Steppenwolf was created, I think Jerry and I had both come to the conclusion that the strong rhythmic element was what we really valued. Our philosophy was ‘Hit ’em hard, make your point and move on.'”

Steppenwolf’s aggressive image co-existed with a thoughtful lyrical stance that challenged mainstream values and counterculture platitudes alike. “That idea of speaking your mind in the lyrics is something I had picked up in the folk-music community, and from growing up in post-World War II Germany,” Kay states. “We didn’t see why you couldn’t have music that worked on a gut level but still offered some food for thought.”

The band’s career momentum and musical progression continued with such best-selling albums as Steppenwolf The Second (which yielded another Top Five classic in “Magic Carpet Ride”), At Your Birthday Party (which spawned the Top Ten hit “Rock Me”), the ambitiously conceptual Monster (whose politically provocative title track became a surprise hit), Steppenwolf Live (which featured studio single “Hey Lawdy Mama”), Steppenwolf 7 and For Ladies Only. Along the way, various members came and went, with bassist Moreve leaving in late 1968; he was initially replaced by former Sparrow member Nick St. Nicholas, before being supplanted in early 1970 by George Biondo. Guitarist Monarch exited in 1969, replaced first by Larry Byrom and subsequently by Kent Henry.

“Steppenwolf was always kind of a work in progress,” says Kay. “By our second album, we had become more confident in not having to mimic others in our attitude, in our look or in our music. We were really in uncharted territory to a great extent, because at the time there were very few models of how all this should work. You’d play some arena in Monroe, Louisiana, using the same public-address system that they used to announce basketball games, with no monitors. You’d spend a lot of time scratching your head thinking ‘There’s got to be a better way to do this.'”

Steppenwolf’s popularity and influence continued unabated into the early 1970s. But, burned out from the endless album/tour grind, the quintet officially disbanded on Valentine’s Day 1972, a day that L.A. Mayor Sam Yorty officially designated as “Steppenwolf Day.” Kay then released a pair of critically acclaimed solo albums, Forgotten Songs and Unsung Heroes and My Sportin’ Life, which found him exploring new musical and lyrical territory, with rewarding results.

It was around this time that Kay learned that two of his former band mates were touring with a bogus “Steppenwolf.” The notion of the fake band playing low-rent club gigs-and tarnishing the legacy he’d spent nearly a decade building-aroused Kay’s fighting spirit, motivating him and Steppenwolf co-founder Jerry Edmonton (who by then had retired from music in favor of a career in photography) to take steps to establish their legal claim to the band name.

In 1980 Kay launched an all-new lineup, now billed as John Kay and Steppenwolf, virtually starting from scratch to restore his band’s good name. The new group spent the next several years working a punishing touring regimen, playing anywhere and everywhere it could to rebuild Steppenwolf’s reputation as a class act.

“That was a real ego adjustment, and a real test-do you want to do this badly enough to rebuild this thing from the ground up?,” Kay admits. “It was a tremendously humbling experience, grinding it out 20 weeks at a time, reconquering small chunks of real estate step by step. But it showed me that there were people out there who still felt a deep connection to Steppenwolf. By 1987 or thereabouts, we came up for air and looked around and saw what we’d accomplished. We didn’t have any albums in the Top 40, but we had built this solid thing that was kind of like the Grateful Dead in miniature.”

Indeed, the lengthy rebuilding period had put Kay and company back in touch with a large and loyal fan base-as well as an influx of younger listeners responsive to band’s enduring appeal-that has kept Steppenwolf rolling ever since. Since then, John Kay and Steppenwolf-which now includes longtime members Michael Wilk (keyboards/bass) and Ron Hurst (drums) and relatively recent addition Danny Johnson (guitar)-have released seven albums and maintained a busy international touring schedule that keeps the band on the road for several months per year. The band also hosts Wolf Fest, an annual weekend-long festival that draws fans from around the world-fondly dubbed “the Wolfpack”- to the band’s adopted home base in Tennessee.

In 1994, on the eve of Steppenwolf’s 25th anniversary, Kay returned to the former East Germany for a triumphant series of Steppenwolf concerts; that trip reunited him with friends and relatives he had not seen since his early childhood. The same year, Kay published his autobiography, Magic Carpet Ride, which compellingly related the ups and downs and his and his band’s history.

Today’s Steppenwolf, operating without major-label financing, is the model of a successful cyber-age cottage industry. The band’s self-contained operation incorporates an in-house 24-track digital recording studio, as well as an extensive website-www.steppenwolf.com-that serves as a cyber-clubhouse for fans around the world. The website also functions as an outlet for Steppenwolf music, allowing fans easy access to the group’s recent work, as well as CD reissues of the entire Steppenwolf and John Kay album catalogue. The band continues to generate vital new music, with a number of recording projects in the works, including the recent John Kay solo effort, Heretics and Privateers.

Steppenwolf’s dramatic and sometimes turbulent history recently became the subject of an episode of VH-1’s documentary series Behind the Music. That much-talked-about broadcast underlined the band’s ongoing stature and influence, but John Kay, now in his fourth decade with Steppenwolf, remains focused firmly on the future.

“There’s a lot of truth in that old cliché about whatever doesn’t kill you making you stronger,” Kay concludes. “Looking back, I realize that it’s the struggles that have taught us how to gain our independence and live the rock ‘n’ roll of life on our own terms.”

For in depth information on the life and times of John Kay & Steppenwolf, read John Kay’s autobiography “Magic Carpet Ride” as written by John Kay and John Einarson.