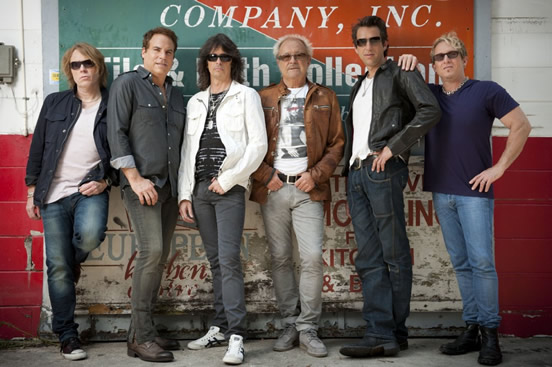 With a catalog of multi-platinum gems including Cold As Ice, Juke Box Hero, I Want To Know What Love Is and critically-acclaimed wonders from the 2009 “Can’t Slow Down” album—Foreigner is a band continually forging new musical peaks. Comprising Foreigner’s dynamic lineup are founder-lead guitarist Mick Jones, lead vocalist Kelly Hansen, bass guitarist Jeff Pilson, multi-instrumentalist Tom Gimbel, keyboardist Michael Bluestein and drummer Mark Schulman. The original incarnation of Foreigner, formed by Jones in 1976, included fellow Brits Ian McDonald and Dennis Elliott, as well as Americans Al Greenwood, Ed Gagliardi and Lou Gramm. It was this mix of nationalities, and a feeling that music was coming from a different place, that inspired the band name. Stoked with Jones’ song-writing mastery and Gramm’s fiery vocals, Foreigner embarked on an unprecedented course of larger-than-life rock and never looked back.

Foreigner has 14 (and counting) Top 20 hits – some of them the most enduring songs in rock history – as well as 10 multi-platinum albums. Jones, who began playing guitar in his teens, is a Grammy and Golden Globenominated songwriter and winner of the prestigious British Ivor Novello songwriter award.

Foreigner’s debut album produced these hits: Feels Like The First Time, Cold As Ice and Long, Long Way From Home. The amazing “Double Vision” album followed, as did a string of more hits like Urgent, Juke Box Hero and Waiting For A Girl Like You. Those three songs helped give Foreigner “4” its impressive run at number one on the Billboard chart. At the zenith of 80s sound, Foreigner’s fifth album, “Agent Provocateur,” gave the world the incredible Number 1 global hit, I Want To Know What Love Is. This musical milestone followed the recordbreaking song Waiting For A Girl Like You (14 weeks, Billboard #2). As successful as the band has been with ballads, Foreigner is and always will be a high-energy rock band.

The frenetic ride of the original Foreigner incarnation reached a milestone in 2002 when Gramm and Jones performed together for the last time. Gramm’s decision to leave the band prompted Jones to re-evaluate his life and his vision of Foreigner. With much support and encouragement, Jones rallied a newly-charged powerhouse lineup. A final touch to this intense re-vision was recruiting Kelly Hansen as vocalist, opening full throttle the reemergence of astounding music that speaks to both hard-core Foreigner fans and younger generations.

Foreigner released “Can’t Slow Down” in 2009, which entered the Billboard chart in the Top 30 and had great success on radio with two Top 20 singles. The past two years have been an almost constant run of sold-out shows across Europe and the United States culminating with the release of a live album recorded in Nashville’s Ryman Auditorium that spent thirteen weeks of 2011 in the Billboard Top 200. The September release of the band’s 3-disc set, “Feels Like The First Time,” includes an acoustic CD with an intimate and unique reinterpretation of many Foreigner classics, studio re-records by the new lineup and a live performance DVD showcasing the group’s exceptional live energy. Where will the future take Foreigner? Expect more blazing rock music, ferociously delivered, resonating globally, stronger than ever before.