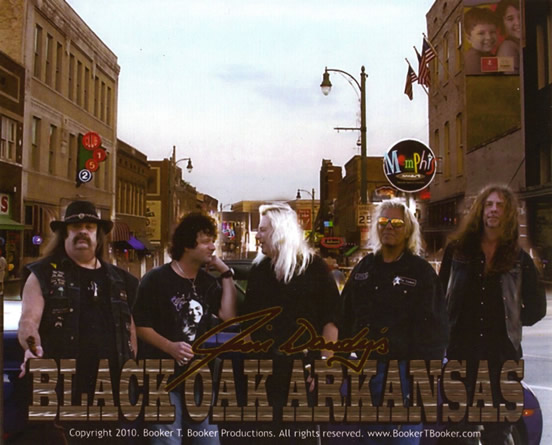 Black Oak Arkansas is an American Southern rock band named after the band’s hometown of Black Oak, Arkansas. The band reached the height of its fame in the 1970’s with ten charting albums released in that decade. Their style is punctuated by multiple guitar players and the raspy voice and on-stage antics of vocalist Jim “Dandy” Mangrum.

Black Oak Arkansas produced their first album under the name of Black Oak Arkansas in ’71, The southern rockers have a sound that is unique and all their own. These bad boys of the south set standards for live performances, and still electrify audiences to this day. Early in their career, their touring schedule kept them on the road for as many as 10 months at a time. They have 3 gold albums, and have appeared on such TV shows as Don Kirshners Rock Concert, Midnight Special, and ABCs In Concert. The King himself, Elvis Presley, encouraged them to perform the LaVerne Baker Classic, which has become their signature song, Jim Dandy to the Rescue.

These days Black Oak Arkansas keeps up a busy tour schedule, especially during the summer when they are a favorite at bike rallies and outdoor music fairs and festivals around the country. In 2004 Rhino Records released a new Black Oak Arkansas DVD called “The first 30 years!” now in store worldwide. It features old videos and TV appearance spanning the groups long history. In 2005 the DVD “Live at the Albert Hall DVD” went on sale along with their new CD, “Greatest Hits 2005”, “Keep The Faith LIVE” and “Live at the Albert Hall”.