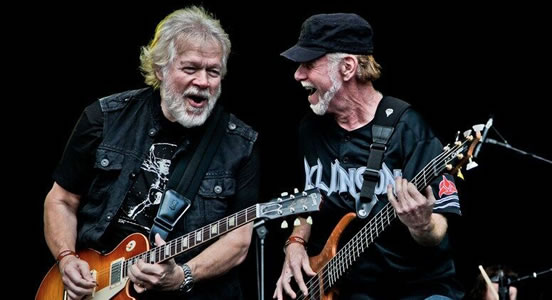 After many years of fan demand, Randy Bachman and Fred Turner—two giants of rock n’ roll—are finally reuniting for the first time in more than 20 years. The musicians at the heart of legendary band Bachman-Turner Overdrive are ready to record and tour again as a new, full-throttle rock machine: Bachman & Turner.

The duo and their top-notch band released their first two singles in two decades, “Rollin’ Along,” and “Slave to the Rhythm,” which is available for sale at iTunes. The track offers fans a long-awaited glimpse into Bachman & Turner’s self-titled, brand new album, which was released in September 2010 on E1 Music (Canada), and RBE Music/Fontana (U.S.). Bachman & Turner’s brand new studio album is stocked with all original new tracks penned by the pair; in addition to “Rollin’ Along,” the album’s anthems include “Rock and Roll Is the Only Way Out” and “Moonlight Rider,” which have a sound that seamlessly fits alongside Bachman-Turner Overdrive classics “Takin’ Care of Business” and “You Ain’t Seen Nothin’ Yet.”

“I’m thrilled to be working on new music with Fred, and I feel a sense of excitement and anticipation,” says Randy Bachman. “I feel like I’m coming full circle, with a completeness that I never ever thought I’d feel again.”

In the mid-‘70s, Randy Bachman earned his first colossal success with Winnipeg rock band The Guess Who, when their hit “American Woman” scored the #1 spot on the Billboard charts, a first for any Canadian act. He soared even further with Fred Turner in Bachman-Turner Overdrive, which became a musical phenomenon with extraordinary global success. At the pinnacle of their career, the band’s distinctive brand of stripped-down, blue collar, meat ‘n’ potatoes rock headlined some of the biggest arenas in the world— from New York’s Madison Square Garden and London’s Hammersmith Odeon, to Hamburg’s Congress Centrum and the Falkoner Centret in Copenhagen.

Over the course of a four-year run, Bachman-Turner Overdrive sold in excess of 30 million records, earning a staggering 120 platinum, gold and silver discs, and notching up hits in more than 20 countries. The band reached #1 on Billboard‘s singles chart (“You Ain’t Seen Nothing Yet”) and album chart (Not Fragile), as well as scoring another handful of hits including “Taking Care of Business,” “Hey You,” “My Wheels Won’t Turn” and “Looking Out for #1.”

When the two stars went their separate ways in 1977, Randy Bachman continued to pursue his unwavering love for music as a solo artist, as well as being part of the much-celebrated Guess Who reunion, then Bachman-Cummings, and subsequently establishing himself as a jazz artist and host of the CBC/Sirius radio show, “Vinyl Tap.” Meanwhile, Fred Turner carried on with the other members of Bachman-Turner Overdrive, before retiring from music at the end of the ’90s to indulge his passion for cars.

But the two had lingering feelings, which persisted for over a decade that they weren’t done just yet. Then last year, Bachman was working on a solo album, for which he intended to invite different vocalists. He first asked Turner to sing on a track called “Rock ‘n’ Roll is the Only Way Out.” “It was perfect for his gritty, refrigerator-sized voice,” explains Bachman. “It turned out so incredible, that I asked if he wanted to sing on a few more. He sent me some of his original material, and from that it morphed into a Bachman & Turner project.”

With the two singers sharing lead vocal duties, the album features smoking mid-tempo anthems such as “Rock ‘N’ Roll is the Only Way Out” and “Rollin’ Along,” as well as the funky riff of “Moonlight Rider” and a slow-burning blues shuffle, “Waiting Game.” In addition, tracks like “Slave to the Rhythm” offer a gratifying fusion of chords with catchy choruses, not to mention the distinctive growling vocals familiar to fans from Bachman-Turner Overdrive classics such as “Let it Ride” and “Roll on Down the Highway.”

Bachman & Turner will soon hit the road together, performing their vast catalogue of hits and previewing a selection of the new songs from the upcoming album. After all, the latter tunes were ultimately all Fred Turner needed to come out of retirement. “If I have a chance to go out and play new things and grow, then I’ll really be offering people something,” explains Fred Turner. “It’s all about the music, the creative process, the collaboration and teamwork of two old friends and partners.”

Bachman & Turner’s world debut occurred in June 2010 at the Sweden Rock Festival alongside some of their contemporaries including Aerosmith, Guns N’ Roses and Billy Idol. The band is currently playing select shows in the U.S., U.K. and Canada, and they are backed by journeymen musicians Brent Howard, Marc LaFrance and Mick Dalla-Vee, who themselves have been performing together for more than 20 years.

Reunited, Bachman & Turner are offering their legions of fans something new, and taking care of some “unfinished” business.