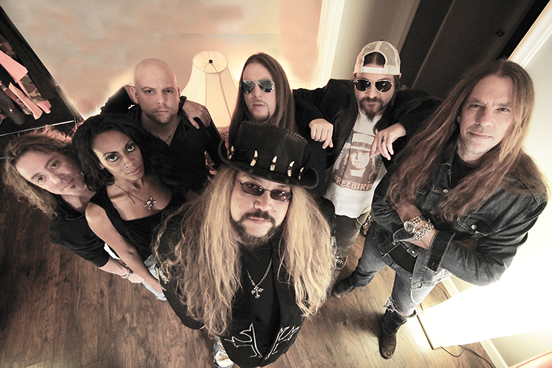 The undeniably charismatic Gig Michaels is the frontman, lyricist, and musical ring master of the seven member North Carolina band known as Swamp da Wamp. He is an imposing figure; in his signature leather top hat and boots Gig stands roughly six feet seven inches tall.  With his long, blond wavy hair and pointed goatee he piques the audience’s curiosity as soon as he takes the stage.  And when they hear him sing…  Well, Gig’s voice is like no other; it’s incredibly deep and rich, with a gravelly edge to it that fans can’t get enough of.

Since the band’s inception in 2006 Gig has been the primary song writer and composer. His talent in both categories has been long acknowledged by his peers.  The legendary, multi-BMI award winner Michael Gardner named him a “songsmith”, which in the music business is among the highest of compliments.

The name of the band is more than a bit unusual:  “Swamp Da Wamp”.  It was a word born of Gig’s scatting during the recording of Birthday, a song that appeared on their self-titled (and first) album.  The band was in the studio listening to that track and one of the band members suggested that they use it as their name as they hadn’t yet settled on one.  It has a Southern, almost country association to it that resonates with their ever growing fan base.

Many of Gig’s songs like Rock this Country (off of the second album “Rock this Country”) and Southern Sunday Tradition (off of “SwampDaWamp”) are powerful, full on rock anthems inspired by his family, his friends, and the archetypal American Man.  Some pieces are poignant and soulful; still others, like Birthday, are upbeat in tempo but retain a shade of melancholy.  Miss Becky, a song about drummer David Lee’s Mother (off of their first self-titled album “SwampDaWamp”) spent 10 weeks on XM Country charts, entering at #16 and reaching #4.

Their third album, “2.0”, released in 2009, contained three original songs plus extended versions of each of those.  Although it only had a total of six songs on it the album was significant in the history of the band in that it has a stronger and much more pronounced rock “feel” to it than any of his previous works.  Unfortunately, halfway through recording the album their producer, the famous Joe Boyland, passed away from heart failure; the album is dedicated to his memory.

The 2011 release Short Stories from a Long Road continues the shift towards a more rock-based sound.   For this album, Gig recruited well-respected musicians from world famous bands such as Lynyrd Skynyrd and The Black Crowes.  The material was eclectic; it had also evolved and no longer focused primarily on the struggles of the everyday man.  This album marks the debut of anti-bullying anthem Fat Boy Can Jam; Gig wrote it as a response to having been picked for being a chubby kid.  It also includes the heart-warming Little Angels and the story of Whiskey Road, a testament to the dangers of alcoholism.  Do Things is an evocative, all-out sexy tune about the passion a man feels for his woman.

Together, the band creates a unique sound – part modern rock, some country, part classic rock, part blues, a dash of Southern rock, but all rock n’ roll.  For the new album “Changes” the band is working closely with a multi-Grammy winning producer.  It’s scheduled for release in the Summer of 2014 and will include the hard rocking tunes Devil in My Whiskey and Rollin’, a re-recorded version of Fat Boy, as well as the gorgeous, richly colored song Changes.  The duet Happy Anniversary, sung by Gig and Swamp’s backup vocalist Adrienne Nixon, is a simple, beautiful, and highly relatable ballad.  The story is about a couple who used to be together, they’re now a thousand miles away from each other on what would have been their anniversary, and each blame themselves for tearing down the relationship.

According to Gig, “anyone who has ever gone thru a break up where they loved one other but just couldn’t make it work will immediately identify with this song.  It was released on an earlier album with just me on vocals but I wasn’t entirely happy with it as I had originally written it as a duet.  At the time I just couldn’t find the right vocalist to sing it with – until Adrienne came into the band.  I knew I had made the right choice the night we sang it in public for the very first time.  It pretty much shut up everyone in the bar – and we got a standing ovation.  Yep, that’s when I really knew we had a hit on our hands.”

Both the general public and the music industry are taking notice:  In June of Swamp da Wamp won the prestigious Carolina Music Awards’ “Best Rock Band 2013”.   The “Stop Bully Foundation” of Canada has adopted Fat Boy Can Jam as their anthem, and it is played by radio stations all over Canada and parts of the US.

In late 2013 Swamp signed with Chappell Entertainment for management and Artists International Management (AIM) for bookings.  In support of the new album Swamp da Wamp will tour the US, Canada, and Europe.