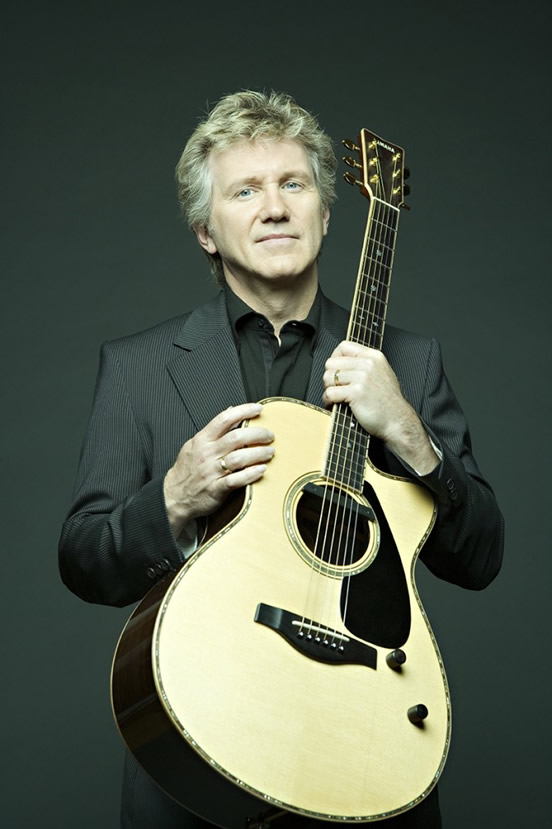 Rik Emmett was a relatively unknown singer/songwriter/guitarist on the local Toronto scene in September of ’75 when he joined a newly-formed hard rock trio called Triumph. By ’79 three albums had gone platinum in Canada and two charted in the States, receiving serious radio airplay. By ’81 Triumph was firmly established as one of the premier touring rock acts in North America, with generous FM radio airplay support and heavy rotation on the fledgling MTV cable channel. In the next seven years, the band released ten gold albums, with four turning platinum in Canada. In the U.S., two went gold.

Emmett’s name frequently appeared in guitar magazine polls and he won several prestigious awards, including Best Lead Guitarist in a national poll in 1981. Rik has said many times in interviews that he always felt the need for the band to try and live up to the name it had chosen for itself. He left the band to begin a solo career in ’88. As one of the band’s original members, Rik was inducted into the Canadian Rock Hall of Fame in ’93, the Music Industry Hall of Fame in 2007, and the Junos Hall of Fame in 2008. Triumph reunited briefly for concerts in Sweden and Oklahoma in the summer of 2008.

A duo project with Dave Dunlop called Strung-Out Troubadours won both Duo Of The Year and Album Of The Year honors at the 2007 Canadian Smooth Jazz Awards. The follow-up CD, entitled Push & Pull, was released in the late spring of 2009. In the fall of 2009, the debut CD of an acoustic guitar trio (the P.R.O. Trio) with Pavlo and Oscar Lopez, entitled “Trifecta”, was released, in advance of the heaviest Canadian touring schedule that Emmett has been involved in since the ‘80’s, commencing in January of 2010 and continuing throughout the year. The album was nominated for a JUNO award as Instrumental Album of the Year.

Rik’s solo career spawned three releases for Duke Street/MCA Records in the early ’90s. The first, Absolutely, went gold in 1990, yielding the hits “Saved by Love” and “Big Lie”, two songs that provided a transition from arena rock while maintaining continuity at FM radio. The ballad “When a Heart Breaks” crossed a rock guitar hero over into other radio formats and revealed a more sensitive singer/songwriter persona. “World of Wonder” also received substantial airplay and showcased an expanding lyrical and stylistic range.

The “Ipso Facto” CD followed in ’92, offering up the hits “Out of The Blue” (a jazzy-bluesy tribute to Stevie Ray Vaughan, Hendrix and Wes Montgomery) and “Bang On”, a rocking return to one of Rik’s personal themes – positive motivation and inspiration. Ipso Facto’s stylistic versatility was no surprise to fans who knew the guy who constantly plugged trademark classical guitar pieces or little jazz tunes in between hard rock anthems, arena blues riffs and progressive flourishes found on past records. A singer/songwriter album called

Spiral Notebook followed in ’95, earning airplay on its ballads “Let Me Be The One” and “The Longing”.

In ’96, Emmett began testing the courage of his musical convictions with work in his own digital studio and through his own independent record label. These instincts paid off artistically. The first release was “Ten Invitations from the Mistress of Mr E.”, original instrumentals of classical nylon-string guitar, reminding critics and fans alike that the rock “guitar god” was never a one-trick pony. Part two of his guitar trilogy, “Swing Shift”, took a completely different musical direction, featuring jazz, swing and fusion. Again, the CD was well received, with the emergence of the song “Santa Fe Horizon” as a classic staple in the smooth jazz field, capturing the interest of brand-new fans in growing musical circles. The spirits of diehard fans were elevated as they witnessed this artistic transformation, defying mainstream classification. “Raw Quartet”, released in early 1999, became the final CD in the trilogy, displaying Rik’s passion and natural affinity for blues.

1999’s “Live at Berklee” (highlights from sold-out shows at the prestigious Berklee College of Music in Boston) was followed by a traditional “Spirit of Christmas” album, recorded in collaboration with Glass Tiger keyboardist Sam Reid. One of the big thrills in Rik’s lifetime occurred in the summer of 2001, when George Benson joined Rik on stage during a guitar festival in Buffalo NY and they brought the house down with an impromptu version of “On Broadway”. 2002 brought the release of a “20th Century Masters: Best of Rik Emmett Collection” through Universal, followed by another widely-acclaimed indie instrumental smooth jazz masterpiece CD, “Handiwork”.

In the late summer of 2003, the acoustic singer/songwriter re-emerged with the “Good Faith” CD, another new chapter in an already storied career. In 2005, Rik was honored as Guitarist of the Year at the Canadian Smooth Jazz Awards, but the wide range of Emmett’s abilities have been constantly on display – from smooth jazz and fingerstyle guitar festivals in Canada to heavy metal festivals in Germany and Sweden: from Artistic Directing a songwriting workshop to jamming with Alex Lifeson of Rush at the Guitar Workshop Plus: from huge classic rock outdoor shows with Triumph, to intimate acoustic duo gigs: from orchestra nights honoring the classic rock song catalogues of Eric Clapton, or The Beatles: through to releases like 2007’s hard rocking “Liberty Manifesto”, or the all-acoustic “Live at Hugh’s Room”, released in the same year.

Rik’s reputation has been bolstered by collaborations that branched away from a mainstream career path.  The first high-profile project was a guitar quartet project in 1987, that produced a vinyl insert recording for the U.S. Guitar Player magazine – ‘Beyond Borders’ featured Liona Boyd, Ed Bickert and Alex Lifeson, bringing Rik’s original compositional sketch to life. Over 20 years later, in another eclectic, daring adventure, the P.R.O. Trio of guitarists Pavlo, Rik, and Oscar Lopez  blended their acoustic styles into Mediterranean and Latin contexts. In the past 8 years, Rik has also worked extensively with guitarist Dave Dunlop in a duo called Strung-Out Troubadours, (later shortened to just ‘Troubs’) and with drummer / vocalist Mike Shotton, in a prog-rock recording project they called ‘Airtime’.

THE GOLDEN THREAD: THE LONG LINE

A guitar magazine once wrote that Rik Emmett was “… his own worst enemy. He’s one of the only guitarists out there who may be too talented for his own damn good”. In a digital sound bite world, this offers insight on a music biz lifer, recognizing a unique artist, still going strong. For 44 years, as his own worst enemy, Rik has tried to base his choices on being a loyal friend to his gifts, instead of a slave to circumstantial fashion (with luggage to match). Rik holds true to his dreams of the magic power of the music, and does his best to share that with every audience, of every stripe, every night that he performs.