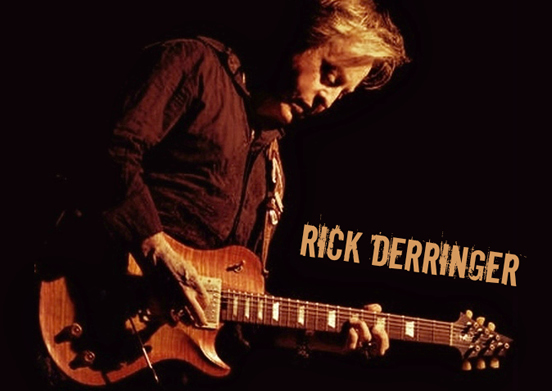 Young guitar great, vocalist and entertainer Rick Derringer was just 17 when his band The McCoys recorded the No.1 hit “Hang On Sloopy” in the summer of 1965, knocking “Yesterday” by The Beatles out of the top spot. The McCoys had enjoyed four years of successful touring, when Rick merged his talents with Johnny Winter in 1969 forming Johnny Winter And (And referring to The McCoys).

Rick was the only producer of all gold and platinum Winter Brothers recordings. In ’71 Rick was featured on three records, “Johnny Winter And”, “Johnny Winter And-Live” and “Edgar Winter’s White Trash”. “And” featured the first version of Derringer’s “Rock and Roll Hoochie Koo” which was also released as a single, then selected again for “And – Live”. Eventually, the busy Derringer joined Edgar Winter’s White Trash full-time and produced the gold LP, “Roadwork”. Derringer’s solo album, All American Boy was released in ’73 with the now already popular “Rock and Roll, Hoochie Koo”, this time as a ‘hit’ single.

Rick was writer/producer of Johnny Winter’s Still Alive and Well album and player/producer of the hit album, They Only Come Out At Night. The latter featured the No. 1, Grammy nominated monster hit, “Frankenstein” and “Free Ride”.

In 1976 Rick created the Derringer Band. He released four albums and in ’83 returned to his solo career with the LP, Good Dirty Fun.

Throughout the 70’s and 80’s the popular Derringer appeared on numerous albums with artists Alice Cooper, Richie Havens, Todd Rundgren and Steely Dan. The list also includes Cyndi Lauper, Barbra Streisand, Kiss, Mason Ruffner and Madam X. In the mid-80’s, Derringer discovered Weird Al Yankovic, producing music for Grammy-winning albums and videos. Derringer’s productions of the Michael Jackson parodies, the No. 1 hit “Eat It”, and “Who’s Fat”, have been Yankovic’s most successful recordings.

It was also in the 90’s that Rick was selected to be producer/writer/performer of the World Wrestling Federation LP’s. Hulk Hogan’s theme song, “I Am A Real American” was written and performed by Rick as a part of these projects.

Derringer was once again sought after by Edgar Winter and in 1990, performed for the LP, Edgar Winter and Rick Derringer Live in Japan. Then in 1999 Rick and Edgar were back together again for their collaboration on hisWinter Blues CD.

Derringer also recorded four blues CD’s starting in ’93 with Back To the Blues followed by Electra Blues, Blues Deluxe and his 2000 releaseJackhammer Blues. At about that same period Derringer, who seems to be constantly in motion, released his destined-to-be-classic, Tend the Fire,in Europe to rave reviews and is eagerly expected by his loyal fans here in the US.

The year 2001 was another busy one for Rick. His venture back into Rock & Roll with Vanilla Fudge superstars, Carmine Appice and Tim Bogert, produced a recording of intense synergy – D B A (for Derringer, Bogert & Appice) with vocals, writing and instrumentals shared by all three. 2004 promised a reprise for Derringer and Appice, with the release of D-N-A.

After D B A, the next project was truly a work from the heart and soul of Rick and his wife Brenda Jean (Jenda Hall). Entitled Aiming 4 Heaven, it brought forth their devotion to God and put it into song with help from their children, Lory & Martin. That project opened the doors for a worldwide release on Reborn Records.

We can’t forget the Winter of 2002, where Rick ventured into a whole new musical world – Smooth Jazz. Interest in Rick Derringer – Free Ride grew quickly at radio, and the second single “Hot And Cool” (in the ‘Radio and Records’ top 20 for 5 months, and number 42 for the year) showed Derringer right at home in the format. It might come as a surprise, but as he explains, it’s the kind of music he’s been waiting to do his whole life. His wife Brenda is featured as co-writer on three songs, and arranger/singer on the title cut.

It seems like almost too much story to take in at one sitting, but the most surprising part is, after more than four decades he’s still going strong!