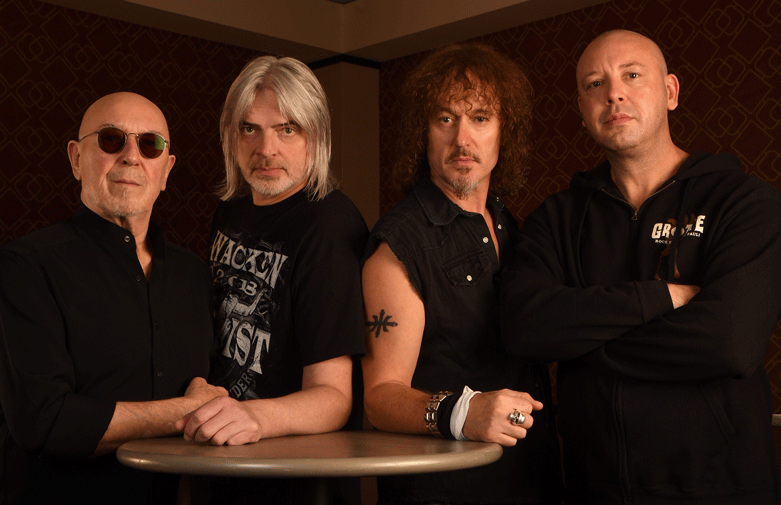 NAZARETH is without doubt the biggest rock band to emerge from Scotland.

They were the pioneers, eventually acquiring legendary status, who took Scottish Rock international and paved the way for many other great Scottish bands that came later – the likes of Big Country, Simple Minds, etc.

The original members first came together in Pete Agnew’s band, The Shadettes, which he had formed with some schoolmates in 1961, the line-up being drums, bass and two guitars, with keyboards being added later. Pete Agnew was lead singer and rhythm guitarist. Darrell Sweet joined in 1963 replacing the original drummer. Dan McCafferty joined in 1965 and now the band had twin lead vocals. Manny Charlton joined in 1968 replacing the original lead guitarist. In 1969, both the bass player and keyboard player were fired for constantly missing rehearsals and showing up late at gigs, so this was when Pete started playing bass for the first time and they were now down to the four guys who changed their name to NAZARETH in 1970.

In 1971 they gave up their day jobs, moved to London and recorded their first album, Nazareth, which was the beginning of what was to become a long and illustrious recording career. Although Nazareth and their second album, Exercises, received reasonable reviews, they were by no means big sellers.

It was when the band toured America with Deep Purple in the 1972 that they met Roger Glover who went on to produce their breakthrough album, Razamanaz, in 1973 that included the hits “Broken Down Angel” and “Bad, Bad Boy.” The next album, Loud ‘n’ Proud, was released later the same year and featured the single, “This Flight Tonight,” a song written by Canadian Joni Mitchell, which became a huge hit throughout Europe and Canada.

In 1974 came the album Rampant and the massive tour in support of its release, seeing the band play 50 shows in 9 countries throughout Europe and Scandinavia, and putting three NAZARETH albums (Razamanaz, Loud ‘n’ Proud and Rampant) in the Top 20 at the same time. The tour was quickly followed by the release of the single, “My White Bicycle,” which gave them another chart hit in UK and Germany. They were riding a crest of popularity around the world, but still had not managed to get that elusive American hit that every band needs to prove they are a global success. As it turns out, that hit was just around the corner.

American success and international acclaim was brought in 1975 by NAZARETH’s album, Hair Of The Dog, and its title track of the same name, popularly known as “Son of a Bitch” due to its hook lyric (“now you’re messing with a son of a bitch”), became a staple of rock radio throughout the world.

The American version of the album contained the beautiful, “Love Hurts,” which still sets the standard for a rock ballad vocal to this day. The song became a worldwide hit, reaching No. 1 in many countries and famously staying at No. 1 in Norway for 14 weeks, making it one of the world’s “longest at No.1 singles.” In 1982 the band released “Dream On,” another ballad that was to become an anthem throughout Europe.

The world touring circuit changed dramatically in 1989 when the Berlin Wall came down. For the first time, Western rock bands had access to all of Eastern Europe, including the biggest country in the world, Russia. It was (and still is) an incredible time for NAZARETH, as they soon found out that for years, Russians considered them one of the world’s biggest bands. On their first tour in 1990 they started out with 10 shows in Moscow’s Olympic Stadium and 12 shows in St. Petersburg’s Olympic Sports Palace.

From 1971 till now, NAZARETH has recorded 23 studio albums, earning them Platinum, Gold and Silver Awards throughout the world, with 3 Platinum and 8 Gold Award albums coming from Canada alone. Their latest album, released in 2014, Rock ‘n’ Roll Telephone, was described by one music critic as “one more masterpiece,” so we will just leave it at that.

The NAZARETH line-up today consists of Jimmy Murrison – the longest serving guitarist in the band’s history; Lee Agnew, drummer since Darrell Sweet’s death in 1999; Pete Agnew, the band’s founder; and Carl Sentence, who joined the band in 2015 after Dan McCafferty had to retire for health reasons. Reviewing one of the first shows with Carl performing as lead singer a member of the press confirmed what the band members already knew, that “He fits right in as a man on a mission to prove his worth and totally nails it. He has mastery of the material and wears the songs like an old leather jacket.”

Over the last five decades NAZARETH has played quite literally thousands of concerts worldwide – ranging from rock clubs to stadiums. When asked once if he could remember playing in a certain town, Pete answered, “If it’s got electricity, we’ve played it.”