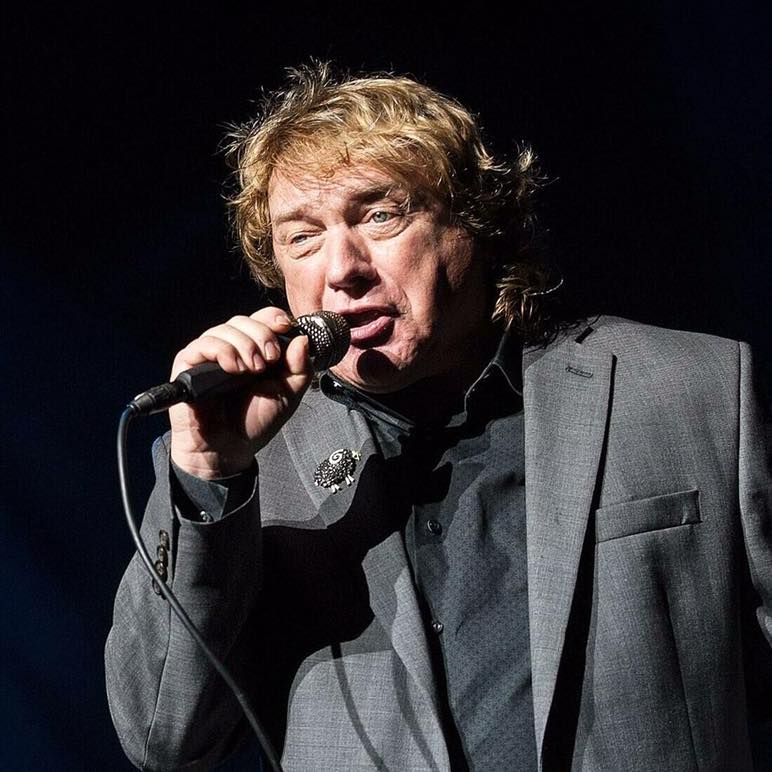 Gramm was born in Rochester, New York, and began his musical career in his mid-teens, playing in local Rochester bands, including St. James Infirmary (later The Infirmary), and PHFFT. He later sang harmony vocals in another local band, Poor Heart. Gramm then went on to sing and play drums, and to eventually become front man for the band Black Sheep. Black Sheep had the distinction of being the first American band signed to the Chrysalis label, which released their first single, “Stick Around” (1973). Black Sheep played in nightclubs in Rochester and Buffalo, NY, including McVan’s, formerly at Niagara Street and Hertel Avenue. Soon after this initial bit of success, Black Sheep signed with Capitol Records, releasing two albums in succession [Black Sheep (1974) and Encouraging Words (1975)]. They were the opening act for KISS when an icy accident with their equipment truck on the New York State Thruway suddenly ended the band’s tour on Christmas Eve, 1975. Unable to support its albums with live performances, Black Sheep came prematurely to a screeching halt.

A year earlier, Lou Gramm had the opportunity to meet his future bandmate Mick Jones. Jones was in Rochester performing with the band Spooky Tooth, and Gramm had given Jones a copy of Black Sheep’s first album (S/T). It was early in 1976, not long after Black Sheep’s truck accident, when Jones, in search of a lead vocalist for a new band he was assembling, expressed his interest in Gramm and invited him in a phone call to audition for the job of lead singer.

Foreigner Formation and Heyday
With the blessings of his Black Sheep bandmates, Gramm flew down to New York to audition for the still-unnamed band. With his powerful vocals, he got the job. Lou Grammatico then became Lou Gramm, and, with the band initially known as “Trigger,” and later renamed Foreigner, became one of the most successful rock vocalists of the late 1970s and 1980s. Circus magazine in 1978 upon release of “Hot Blooded” commented that Lou Gramm had a voice that Robert Plant might envy. His unique vocals have made Foreigner one of Billboard’s Top 100 Artists of All Time in hit songs history.

Gramm was the lead vocalist on all of Foreigner’s hit songs, including “Feels Like the First Time”, “Cold as Ice”, “Long, Long Way from Home”, “Hot Blooded”, “Double Vision”, “Blue Morning, Blue Day”, “Head Games”, “Dirty White Boy”, “Urgent”, “Juke Box Hero”, “Break It Up” and “Say You Will”. He co-wrote most of the songs for the band, which achieved two of its biggest hits with the ballads “Waiting for a Girl Like You”, which spent ten weeks at #2 on the 1981-82 American Hot 100, and “I Want to Know What Love Is”, which was a #1 hit internationally (US & UK) in 1985. Their first 8 singles cracked the Billboard Top 20, (4 went Top 10) making them the first group since the Beatles to achieve this in 1980.

Following the band’s second album, the wildly successful Double Vision, shifts in personnel began to take place. Following their next album, Head Games, Gramm and Jones jointly decided to reduce the band’s lineup from six to four members. The next album, which Gramm has called the high point of his work with Foreigner, was aptly titled 4. Gramm wanted the band to remain true to its purer rock origins, favoring music with a solid drum and guitar structure, whereas Jones embraced the 1980s style of synthesizer ballads — a more lucrative approach at the time. Indeed, the next album, Agent Provocateur, would find Jones moving creatively in the opposite direction from Gramm, seeking out potential co-producers such as Trevor Horn, and then Alex Sadkin, which ended up giving Foreigner’s sound a somewhat new-wavish, keyboard-dominant quality.

Late 1980s and 1990s
By 1987, Foreigner continued to struggle with ongoing internal conflicts. During this period, Gramm released his first solo album, Ready or Not, which received critical acclaim and contained a top five hit single with “Midnight Blue”. This was followed by the late-1987 Foreigner album Inside Information, which reached number 15 on Billboard’s album chart. The extracted “Say You Will” was released late that year, reaching number 6 on the Hot 100 early in 1988, and “I Don’t Want to Live Without You” followed, reaching number 5 on the Hot 100 and number one on the adult contemporary chart in the spring. A third single, “Heart Turns to Stone” reached number 56 in the summer. Eventually a second solo effort, Long Hard Look, that included the top ten hit, “Just Between You and Me”, and “True Blue Love”, reached the Top 40. Gramm also contributed a song to the soundtrack for the 1987 movie The Lost Boys, titled “Lost in the Shadows.”

Gramm returned to the group in 1992 to record three new songs for the compilation, The Very Best of … and Beyond, bringing a new energy back into the mix. Gramm also brought Bruce Turgon with him to join the Foreigner lineup at this point. In 1992, Gramm became a Born Again Christian “after being tired of the rock ‘n’ roll life and not feeling very fulfilled…I was falling prey to some of the bad habits that can go along with that, and I just decided that my own willpower and strength was not enough, and [being raised a Catholic Christian], I knew the answer was something deeper for a long time.”

In 1995, Foreigner released the album Mr. Moonlight on the Rhythm Safari label which, although relatively successful in Europe, was not as widely marketed or distributed in the U.S. Still, “Until the End of Time” made inroads at adult contemporary radio. With the changing trends in popular music, this now-classic rock band came to suffer the inevitable slowing of their genre’s momentum.

In 1996, Mick Jones invited Gramm to perform backing vocals on a cover version of “I Want to Know What Love Is” he was producing for the Australian singer Tina Arena. The song went on to become a major hit again throughout Europe.

In April 1997, two months after providing vocals for Christian rock band Petra’s Petra Praise 2: We Need Jesus, and on the eve the band was to leave for a Japan tour, Gramm was diagnosed with a type of brain tumor called a craniopharyngioma. Although the tumor was benign, the resulting surgery damaged his pituitary gland. In addition, the recovery program had caused Gramm to gain weight, and likewise affected his stamina and voice. He continued to work with Jones throughout his illness and in 1999, Gramm was back touring with Foreigner playing summer festivals and smaller markets.

2000s to present
Gradually, Gramm’s health and energy rebounded. Gramm left Foreigner again in 2003, and has been touring the U.S., Canada, and Mexico (as well as performing occasional dates off the continent) steadily since January 2004. Lou Gramm continues to tour with his band, performing many of his old Foreigner hits. In May 2013, Triumph Books released Gramm’s autobiography Juke Box Hero: My Five Decades in Rock ‘n’ Roll.