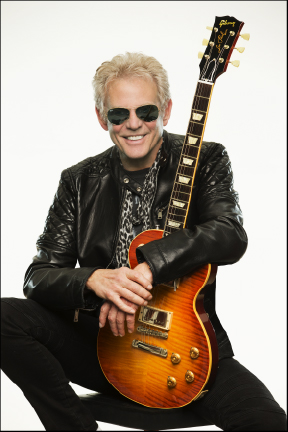 No matter how you look at it, 2019 shaped up to be the Year of the Fingers — Don “Fingers” Felder, that is. Felder, a true American rock and roll guitar hero, is very much looking forward to building upon his rich legacy as one of the most innovative riff-generating songwriters of the modern rock era while continuing his growth as a featured touring and recording solo artist.

To that end, Felder finds himself most decidedly back in the driver’s seat with the April 2019 release of his first solo album in seven years, American Rock ’N’ Roll (BMG). American Rock ’N’ Roll consists of 11 high-energy rockers mixed with touching, thoughtful ballads. ARnR also boasts a who’s who of A-list guest contributors including Slash, Sammy Hagar, Peter Frampton, Mick Fleetwood, Joe Satriani, Orianthi, Richie Sambora, Alex Lifeson, and many, many more. “On [2012’s] Road to Forever, I had only one guest on guitar — Steve Lukather [of Toto] — and I played every other guitar part on every other song,” he concludes. “I didn’t want to do that this time. I wanted to have people come in and light it up. My goal was to play with them and have a good time. It was a ball!”

Not only is Felder a proud, longstanding member of the Rock and Roll Hall of Fame, having been inducted with the Eagles back in 1998, he was also inaugurated into the Musicians Hall of Fame and Museum in Nashville in 2016 and the Florida Artists Hall of Fame in 2017. Fact is, Felder spent 27 years with the Eagles, who have sold over 150 million albums worldwide to date and own the fine distinction of recording the top-selling album of all time — Their Greatest Hits (1971-1975), which has sold over 38 million copies (and counting). “I’m blessed enough to have contributed to and been a part of a very talented mixture of voices, writing, guitar parts, and production,” he says of the group. “It was a magical, unique combination that happened in a certain place and time. I’m very proud of that.”

Don left the band in 2001 and has since forged an impressive career as a top-tier solo artist, having placed the hard-driving “Heavy Metal (Takin’ a Ride)” in the pole position of the same-named 1981 animated film (a song that remains one of the most requested staples of his live set to this very day), along with a pair of fully realized full-length albums, 1983’s sonically soaring Airborne and 2012’s multifaceted song-cycle treatise, Road to Forever.

Felder added “best-selling author” to his ever-impressive C.V. when his spellbinding 2008 memoir, Heaven and Hell: My Life in the Eagles (1974-2001), became an instant New York Times bestselling smash. “There’s still a lot of excitement about it,” he observes. “I still get all these posts about it on Facebook and Twitter, and as many as 50 people come up to the front of the stage who have the book and want me to sign it at just about every show.”

The “Fingers” nickname is well-warranted, as anyone who has ever watched the man’s hands blaze across whatever guitar fretboard he has in tow can readily attest. In fact, the inherent prowess of those dexterous digits helped Felder navigate the burgeoning rock scene in his native Gainesville, Florida, while he was growing up there in the 1960s. That formative time included a stint teaching guitar to a young sandy-haired Southern gentleman by the name of Tom Petty. “Who knew he would become such a rock music icon?” Felder muses. “I was so proud to see Tom become as popular and influential as he did.”

Felder also studied hands-on with the masters himself, having learned slide guitar from his longtime friend Duane Allman, not to mention incorporating the more melodic principals of jazz icons like Glenn Miller, Tommy Dorsey, and Miles Davis alongside the core values of the blues he gleaned from the likes of Albert King and B.B. King into his own milieu. “I’m primarily influenced melodically by horn players,” he reveals. “I learned about pacing from Miles Davis, who would take a breath and leave you hanging on a note while he finished his phrase — that was very influential on me. I realized most horn players can only play one note at a time, and you have to be very selective about the melody you choose.”

Don’s discerning musical taste ultimately bore much great fruit in iconic, prime rock-era Eagles songs. Bear witness to how his matchless lead-guitar tone added extra fuel to “Already Gone,” “One of These Nights,” “Take It to the Limit,” and “New Kid in Town,” in addition to his co-writing “Victim of Love,” “Those Shoes,” and his most popular co-creation, “Hotel California,” which he recast in an entirely new way for the Eagles’ Hell Freezes Over in 1994. “I will tell you the version of ‘Hotel California’ that I re-recorded on nylon-string guitar for that reunion is the only song I know of — and I’ve asked the people in the RIAA — that has been recorded twice by the same band, and then nominated for Grammys both times. Isn’t that something?” (The original “Hotel California” single won Record of the Year in 1977, and the Hell Freezes Over single version was nominated for Best Rock Performance by a Duo or Group With Vocal in 1995.)

Felder has also recorded with and performed alongside top-drawer artists such as The Bee Gees, Peter Frampton, Michael Jackson, Alice Cooper, Warren Zevon, Diana Ross, Stevie Nicks, Vince Gill, Barbra Streisand, Elton John, Joni Mitchell, Paul Simon, and Stephen Stills, whom Don first crossed paths with in the aforementioned Gainesville in the early 1960s. (Don’s impressive list of collaborators, like the road, could literally go on forever.) “I grew up with Stephen Stills,” Felder confirms, “and before I joined the Eagles in 1974, I toured with Crosby & Nash in ’73, ironically by being Stephen Stills, playing and singing his parts.” Felder clearly left a distinct impression on that storied duo, as Graham Nash himself notes, “I’ve always been an admirer of Don’s. As a guitar player and a singer, he’s so great. He learned all of our stuff overnight, and he played with us the very next day. I’m a fan.”

Spending more and more time on the road as the frontman of his own tight-knit solo band made Felder realize he needed to put in the time to hone his own distinctive voice into a finely tuned instrument. “That’s just how I work,” Don explains. “A lead vocal has to fit the song — it has to fit the timbre and texture of the song. Otherwise, you’re a one-note samba.” Felder counts extended road runs with Foreigner, Styx, Peter Frampton’s Guitar Circus, and REO Speedwagon as touring highlights.

In addition to his musical proficiency as a double-threat guitarist/vocalist, Felder is most proud of his ongoing charity work for the likes of Starkey Hearing Foundation in 2018, the Ruck N Roll Charity Ball in Hong Kong for underprivileged children in 2016, and Autism Speaks in 2014, to name but a few of the worthy causes he supports.

What’s next for Fingers Felder? Extensive touring is most definitely already locked into place to get behind the majestic sounds and broad shoulders of American Rock ’N’ Roll. In the meantime, let us continue to admire the essence of Don Felder, a man who continues to push boundaries and expand horizons. It’s the only way that he can travel down that road.