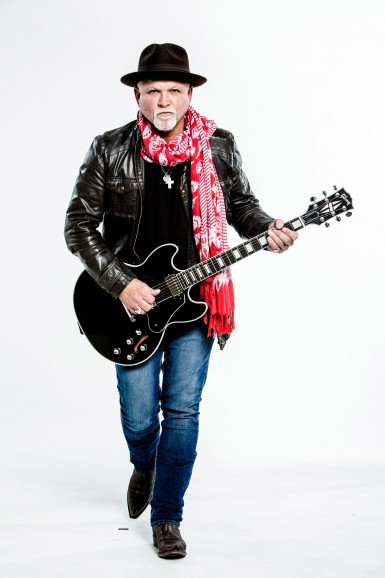 Detroit, Michigan may be known as The Motor City, but the area is as famous for music as it is for car engines! Eleven-year-old Derek St. Holmes was being influenced by the local music scene around the time he acquired his first guitar. As he honed his skills in his parent’s basement, he could not have fathomed that in a little more than a decade he would take the world of rock ‘n’ roll by storm. Motown was the sound of Detroit in the 1960s, but by the end of the decade, and into the ‘70s the area was a hotbed of hard rock that included The Stooges, The MC5, Bob Seger, Alice Cooper and Ted Nugent & the Amboy Dukes. Soon, that scene would also include Derek St. Holmes.

It all began in 1974 when St. Holmes’ band Scott opened a gig for Ted Nugent and the Amboy Dukes. Nugent was making a name for himself around the Midwestern portion of the United States, but thus far had been unable to take his music to the next level.  After seeing, and hearing, the young St. Holmes on stage, he knew what was missing and invited Derek to join his band. Derek brought a strong set of pipes, solid musicianship and songwriting skills to Nugent’s music, and in March of 1975 the world was introduced to him via Nugent’s self-titled debut album.  While it was Nugent slinging down the guitar licks, it was Derek’s voice all over FM radio singing the soon to be classics “Stranglehold,” “Stormtroopin” and “Just What the Doctor Ordered.” In addition, Derek wrote, arranged and sang the classic tune “Hey Baby.” Derek quickly became regarded as one of the best voices on the international rock scene, all at the tender age of 22 years old.  Nugent and St. Holmes continued their winning combination for three more iconic albums, Free for All in 1976, Cat Scratch Fever in 1977 and Double Live Gonzo in 1978. St. Holmes left the band and formed St. Paradise with ex-Nugent bassist Rob Grange in 1979, releasing one album. St. Paradise never took off as hoped, but the in-demand St. Holmes quickly teamed up with Aerosmith’s Brad Whitford to form Whitford/St. Holmes.  In 1981, they released the album Whitford/St. Holmes, which was produced by the legendary Tom Allom (Judas Priest, Krokus, Def Leppard, Loverboy).  The album was well received and remains a cult classic to this day. In 1984, St. Holmes lent his vocal skills to German guitarist Michael Schenker’s band, MSG, on the album Built to Destroy. Derek also continued his on again/off again relationship with Nugent in both the 1980s, and ‘90s, co-writing several songs on Ted’s comeback album Spirit of Wild in 1996.

On July 4, 2000 Derek released his first solo album, after a quarter century in the music business. The critically acclaimed album, titled Then & Now featured songs that demonstrated the many facets of St. Holmes talents.  His vocals ranged from the expected hard rockers, to bluesy numbers, to a heartfelt ballad. His guitar playing covered everything from hard rock, to blues, and even included an acoustic number. Derek spent the next ten years performing in many bands and being a part of many projects, always remaining active in the music business. After years of Nugent fans begging Ted for Derek’s return, St. Holmes was invited by the Motor City Madman in 2011 to once again take his place on the Nugent stage. Derek appeared on Nugent’s 2014 album ShutUp&Jam, singing the tune “Everything Matters.”

In 2015, Derek is writing and recording new music with Rock and Roll Hall of Fame guitarist Brad Whitford for the long awaited follow up to 1981’s Whitford/St. Holmes album.  Once the album hits the shelves, look for the pair on the road for select dates! Derek St. Holmes is a living testament to hard work and dedication.  His voice remains as powerful as it was in 1974 when Nugent knew he had to snag him for his band. His guitar skills are equal to Nugent as well, a fact often overlooked due to his stellar vocal skills. While Derek will always be a rocker identified with the iconic classic rock staples “Stranglehold,” “Hey Baby,” “Death by Misadventure” and “Dog Eat Dog” he has the heart, soul and voice of a true bluesman, something the world heard first hand when “Hey Baby” was released way back in 1975.  St. Holmes’ abilities are surpassed only by his spirit and love of music. The future looks bright for Derek St. Holmes, but, then again, why shouldn’t it?  He is one of this generation’s greatest voices and a true unsung hero on the six-string. We may be forty years down the road, but in many ways Derek St. Holmes is just getting started.