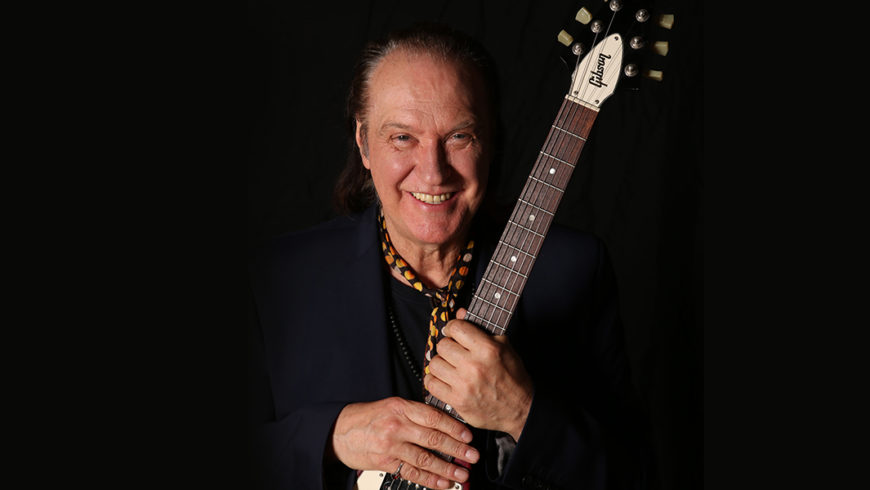 “The riff machine. Svengali hooks… there is but one Dave Davies”

Lead guitarist and co-founder of the legendary group the Kinks, Rock N Roll Hall of Famer Dave Davies returns to the USA for a 2017 tour, highlighting his contribution to the Kinks legacy with his revolutionary guitar sound that changed rock `n` roll and his unique writing style.

Dave will be celebrating the release of his new album “Open Road” recorded with his son Russ Davies, as well as the upcoming film “Dave Davies: Strangers” and a new solo album due for release later in the year. He will perform a set of solo hits and Kinks classics, accompanied by his accomplished band.

Dave Davies is the pioneering rock guitarist who single-handedly changed rock-n-roll when he sliced his little green Elpico amp speaker with a razor blade, creating the first heavy metal guitar tone and riff. This revolutionary guitar sound propelled the Kinks into stardom with the global smash hits ‘You Really Got Me’ and ‘All Day and All of the Night’, followed by numerous other classics over the next decades.

“You Really Got Me and All Day and All of the Night were predecessors of the whole three-chord guitar genre,” says musicologist Joe Harrington. “The Kinks were one of the bands responsible for turning rock ‘n’ roll into rock.”

“As lead guitarist and co-founder of the Kinks, Dave Davies is one of the most unpredictable and original forces in rock,” enthuses writer Bill Crowley.

“His distinctive guitar style went on to have major impact on several key guitar-rock styles, including heavy metal and punk. A Rock and Roll Hall of Fame inductee, Dave’s massive guitar sounds have inspired bands from Van Halen to Green Day.”

Since the early 1960s, Dave has worked on a great number of critically acclaimed records, ranging from solo hit song Death of a Clown, to experimental Kinks records like Village Green Preservation Society and Arthur and the classic song Lola in 1970. Dave further helped shape the sound of the Kinks with his singing and lead guitar on songs such as “Come On Now” and the anthemic “I’m Not Like Everybody Else”. Dave’s solo output continued from the 60s to the 70s and 80s with hits like, “Susannah’s Still Alive” and tracks on Kinks records like “You Don’t Know My Name”, “Strangers” and “Trust Your Heart”. The 80s saw the release of spiritually minded AFL-13606, which featured the wonderful “Imagination’s Real”. Other albums to follow were Glamour and Chosen People. Mainstream success continued with the hit Kinks albums Low Budget and State of Confusion, as they re-attained the commercial success they previously had in America in the mid-60s, before they were unfairly banned for 4 years.

In the 1990s Dave released the solo album, Bug and the compilation Unfinished Business. His songs have been featured in films by John Carpenter and Wes Anderson, who featured Strangers in Darjeeling Limited (the song has been covered by many artists including Norah Jones). One of Dave`s most popular Kinks songs Living on a Thin Line was used in the HBO’s “The Sopranos”.

His autobiography Kink was well received in the late 1990s. In 2010 he worked with son Russell Davies to create the hauntingly beautiful rock electronica album, The Aschere Project. Dave is currently working with another of his sons, Martin, on their second documentary film Strangers, as well as a forthcoming solo album in addition to another album with Russ Davies – “Open Road”.

A BBC documentary about Dave, Kinkdom Kome came out in 2011. Dave’s 2013 album I Will Be Me on Cleopatra Records, showed a return to his groundbreaking guitar sound and songwriting. In 2013 Dave Davies also returned to touring after a long hiatus. He had spent the past decade recuperating from a life-threatening stroke. In 2014, Dave released a meditation book called Heal about his recovery in which he had to learn to walk, talk and play guitar again. His amazing return to playing live and touring in the U.S. was a triumph both creatively and spiritually as he found new inspiration for his album Rippin Up Time. Released to great critical acclaim in 2014 on Sony’s Red River Entertainment label, followed up by the live album Rippin Up New York City also on Sony’s Red River Entertainment label.

A long-time inductee of the Rock n Roll Hall of Fame, Dave Davies expresses the power, sensitivity, magnetism and creative expression of a seasoned yet spontaneous rock-n-roll visionary.

“The reason he’s my favorite guitarist (not to mention singer and songwriter) is that he is the best at three difficult and different things: first, -soloing, which is typically the gauge of great guitarists, but he does something even harder than being flashy just for the sake of being flashy, he crafts solos that are melodic, powerful (when they need to be) and memorable that fit the song like they were written into it. Second, Dave plays riffs/chords behind the vocal (like “No More Looking Back”) that enhance the song – amazingly hard to do (name another guitarist who does it as well!), and third, his intro riffs and licks set up the song so you want to hear the rest of the song. He’s the most complete rock guitarist bar none. And this is in addition to coming up with the legendary power chords that gave us heavy rock and roll! And I’ve been playing for 41 years and I still am in awe of his creativity. “