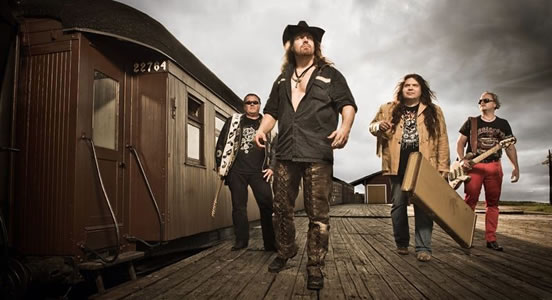 Finnish-American southern blues rock outfit Crossfyre has been around for a good spell already, prior to releasing their smashing debut album Southbound in May 2010. Having toured extensively previously from the USA to Finland, Sweden, Denmark, Holland, Belgium, Germany and Estonia, Crossfyre has been known as a trio, mostly covering classic Stevie Ray Vaughan songs.

Crossfyre was formed in 1990.  Founding member Danny Cross recalls thebeginning:  I remember the first gig we did with Crossfyre.  Me and JJ had been sitting in a bar a couple a weeks before and the owner walked over and asked us do you guys play in a band? I myself had just quit another band and JJ was new in the States. I remember saying yes, and the owner asked us to come and play on Christmas. So me and JJ went to every open jam to find us a bass player and lead singer. Rob was the first man we got hold of, he was a great guy with a weird attitude, but we got it going. The next guy we met was Jeff, he played guitar and did the lead singing and off we went to the gig. All went well and the owner asked us to play again on New Year’s Eve. At that gig, we were joined by a sax player, Poppa John. He was the hairiest, most hard working sax man ever born. One thing lead to another and a couple of gigs later this guy with one arm walks up to the stage and asks me if he could sit in and play with us. I asked him what he played and he told me that he played the piano and keys. I looked at him and said really. He told me don’t let the one arm thing fool you. He got up and played the shit out of those keys. Thinking back, it still scares me how he could do it, then again Rob loved him ‘cos he did not mess with his bass lines.

Cross continues:  As the story goes , we turned out to be one of the hardest working bands in Florida. After Rob left the band we got Mark Brooks on bass. Jeff left the band after a while and we had several guys walking in and out of the band: Bruce Dundee, Paul Roberts, Kyle Reese, Keith MacKendrick from the Champs and T-Bone Arffman just to name a few. Today, the band members are me, StarBuck, JJ and Dan Ronnbacka. Magnus “MacYoung” Ljungqvist appears on shows every once and a while on hammond too. Indeed, of all of the names previously listed, current band vocalist StarBuck brings a new dynamic to the group, as he comes to the band from a heavy rock and metal background, in addition to being a recognized independent professional wrestler worldwide. StarBuck brings a whiskey-soaked baritone sound, loaded with attitude and punch to Crossfyre’s southern blues recipe.

With all members of Crossfyre having extensive experience in various outfits, from the Tin Pan Alley Blues Band to the Roadrunner Band to Gloria & The Hangover Blues Band to Palm Beach Soul to the Paul Roberts Band to Zystem Bag to Fireball to Finland’s legendary Remu & The Hurriganes, you know that these boys mean business. Ride on!