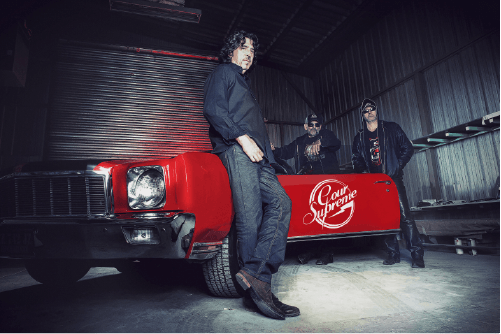 Cour Supreme provides a fine, heavy, greasy and groovy boogie rock. A powerful and flawless rhythmic section, a «bison sounding» guitar, a warm and captivating voice, serving efficient original songs, plus some legendary covers. Cour Supreme? They are the law and you will love that.

Cour Supreme was formed in 2010 by veteran rock musicians, Judge Fredd, Jean-Marc Palma and Gilles Chevalier. Their first 5-song EP came out to great success and they began touring for over three years, opening up for artists such as The Quireboys, Wishbone Ash and Phil Campbell. Meanwhile, in 2013, they released the anticipated answer to their first EP, simply called #2. The band was hired by French brewery, Marshall Beer, to help promote their launch and this is where the Cour Supreme hit, We Want Beer anthem was created. Their latest single, Big Zulu, off their soon-to-be released 3rd album, is a powerful straight-forward rock piece that shows that rock music is alive and Cour Supreme is here to bring it in full force.

Metal Integral
…Ideal soundtrack for a Harley Davidson gathering, # 2 is a no-brainer that makes you nod on all titles, singing the chorus at the second listening…

Metal Chronique
Those three guys just put their guts on the table. The songs are linked naturally, without dead time or lack of taste.

Rock n’ Roll Blog
Big guitars, tight rhythms, male choruses. If this is your conception of music, look no further, Cour Supreme is for you.

Rock Made in France
Cour Supreme bring life back to this blessed period of the gods where the guitars roared, and the music was all noise and fury. So do not miss this excellent band.

Spirit Of Rock
I’ll be clear: these guys have the guts and the talent to make us a 100% Rock album with a big “R.” I’m referring to this rock that we do not hear too much nowadays, the one with big guitars, amps kneeling, heavy bass and sharp drums.

Pavillon 666
Supreme Court has managed the difficult challenge to impress us with a rock that, although composed in 2013, sounds really 70’s, the old and devilish way.

Jean Marc Palma
With Fool Moon he played more than 1,000 gigs in 25 years, including events such as the Bol d’Or (24-hour, French motorcycle race in Le Mans) and South by South Festival.