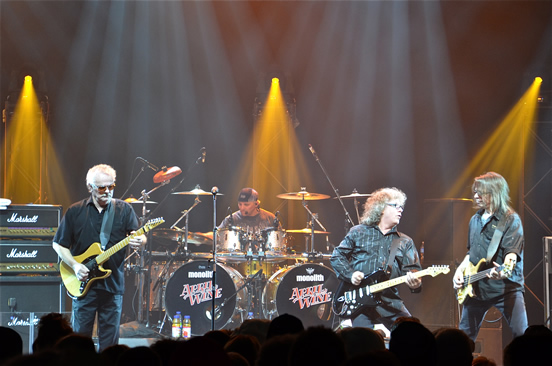 In the Halifax, Nova Scotia suburb of Waverly, Goodwyn was playing in a group called Woody’s Termites. His next door neighbor, Jimmy Henman convinced him to join a group composed of himself and his cousins, Ritchie and David Henman. Jimmy and Goodwyn had previously played together in several bands including East Gate Sanctuary while David and Ritchie played in the Lower Sackville group, Prism (not to be confused with the famous Vancouver group of the same name). The name April Wine was coined by David for no apparent reason. During the recording of the second album ‘On Record’, big changes were developing as vocalist/bassist Jim Henman suddenly returned to college, leaving Goodwyn to lead the band both musically and vocally. Jim Clench was brought in to fill Henman’s shoes on bass. Goodwyn and Clench soon became allies for a shift in musical direction and internal struggles with the Henmans led to the brothers leaving the act to form Montreal-based band Silver and, later, The Dudes with Bob Segarini. Veteran Mashmakhan drummer Jerry Mercer was added after a stint with Roy Buchanan and guitarist Gary Moffet came from Pops Merrily. Typical artistic differences splintered the group and despite Clench’s significant vocal and writing contributions, he left to join BTO for several albums and tours. Steve Lang (The Cheeque, Devotion, Mashmakhan) was his replacement. As part of a drive to make April Wine tougher sounding, guitarist Brian Greenway, also of Cheeque, Mashmakhan and The Dudes was summoned by his old bandmates to quit his forklift job and join April Wine for the ‘First Glance’ LP. All along the way April Wine became an institutional Canadian stadium rock act with Top-40 hit after Top-40 hit. After their successive run, the industry began shifting with techno-pop of the ’80’s and April Wine found themselves a hard rock act with a dwindling audience. Their farewell tour was in 1984 for the ‘Animal Grace’ album and it was successful enough to spawn another in a long line of live albums. Goodwyn put April Wine to bed for a long rest with an eye to working on a solo career. However, April Wine still contractually owed Capitol Records one more album. Greenway joined Goodwyn in Nassau, along with Montreal session musicians Barbe, Pellerin and Simon, to record what was supposed to be the band’s final album – ‘Walking Through Fire’. While living in the Caribbean, Goodwyn released a solo album to middling reviews and zero sales. Soon, a serious discussion to revive April Wine followed. Goodwyn returned to Montreal in preparation for the recording of a second solo album, but interest was steamrolling for an April Wine reunion. Greenway, also licking the wounds of an aborted solo career is the first to sign on. Mercer leaves The Buzz Band and also returns but Moffet is fully committed to his production company (including producing the See Spot Run hit album ‘Weightless’) and his spot is filled by local guitarist Steve Segal. After years away from April Wine, Jim Clench returned from Calgary to Montreal to fill in the bass slot. The band would sign a new record deal with FRE Entertainment and released two albums of mostly new compositions – ‘Attitude’ (1993) and ‘Frigate’ (1994).

“April Wine Live 2003” was released in spring of 2003 and featured the band’s live stage show. It was recorded in Kitchener Ontario. It also featured Carl Dixon on keyboard, vocals and guitar who had joined the band for 3 tours.

June of 2004 saw April Wine travel to Sweden to be part of “Sweden Rock 2004.” They shared the stage with HEART, FOGHAT, UFO and many others.

In 2006 April Wine celebrated their 37th anniversary together with the release of their 16th studio album, “Roughly Speaking”. (Released November 21st 2006)

Jim Clench left the band in January of 2007. He was replaced by Breen LeBoeuf, a talented Bassist and Singer, and a longtime friend of Jerry and Brian. Breen brings the experience of his many years as a member of the legendary Quebec rock band “Offenbach” with him to April Wine. The fans accepted Breen right from the first show at Higher Ground in Burlington, Vermont in February of 2007.

In November 2008, April Wine signed with ARM Entertainment of St. Paul, MN as the April Wine’s agency in the USA. Roger Anderson and his company have been booking many shows for the band in the USA to the delight of American fans. S.L. Feldman & Associates continues to represent April Wine in Canada.

Late 2008 also saw the departure of Jerry Mercer from the band. About to turn 70 years of age in April of 2009, Jerry decided to retire. Jerry had been the driving drumming force of April Wine for 35 years!

Blair Mackay joined April Wine as the new drummer in January 2009. Blair has a Master of Music degree in performance, and like Breen, was accepted by the fans right from the first show, coincidentally at Higher Ground in Vermont.

In March of 2009, April Wine was inducted into the Canadian Music Industry Hall of Fame during Canadian Music Week in Toronto. They also receivedThe Lifetime Achievement Award for being part of Canadian Music History for 40 years.

On April 18th of 2010, at the Juno Awards, April Wine will be inducted in to the Canadian Music Hall of Fame.

In 2010, April Wine entered into their 40th year as a band … quite an accomplishment for any rock n’ roll band! They continue to satisfy fans with a live mix of straight ahead rock n’ roll and power ballads, an April Wine mainstay.