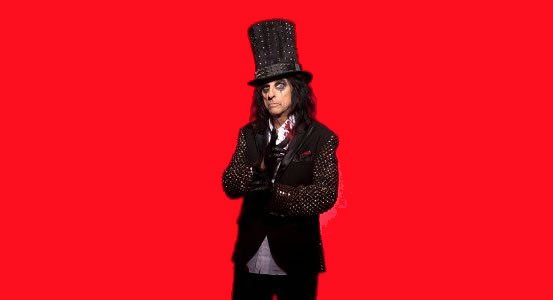 Without Alice Cooper, there might never have been the NY Dolls, KISS, Marilyn Manson, Nine Inch Nails, Motley Crue, Slipknot or Rob Zombie … maybe not even David Bowie, or at least not Ziggy Stardust. The iconic hard rocker, who literally invented the concept of the rock concert as theater, returns to what he does best on Along Came a Spider (SPV Records), the 25th studio album of a long and illustrious career which began in 1969 with the release of Pretties for You on Frank Zappa’s Straight label.

From his first solo album, 1975’s Welcome to My Nightmare through releases such as 1994’s The Last Temptation and 2000’s Brutal Planet, concept albums have been a specialty of Alice’s, and this time he spins the story of a serial killer who imagines himself as the most predatory of all insects, trapping his prey, killing them, then enveloping his eight victims in silk, taking a leg from each of them. A web of intrigue, wrapped around some serious hard rock.

Co-produced by Alice with the team of Danny Saber [Black Grape, Rolling Stones, Ozzy Osbourne, David Bowie] and Greg Hampton [Bootsy Collins, Buckethead], songs like the opening “I Know Where You Live” and “Vengeance Is Mine,” featuring a snaking metal guitar solo from Slash himself, evoke such classic Alice anthems as “Is it My Body,” and “Under My Wheels” along with landmark albums like Love It To Death, Killer and School’s Out. There’s also a patented rock ballad in the tradition of “Only Women Bleed” and “I Never Cry” with “Killed by Love.” Along Came a Spider features Cooper’s touring band of drummer Eric Singer, bassist Chuck Garric and guitarists Keri Kelli and Jason Hook. Songwriting was handled by Alice with Saber, Hampton, Garric, Kelli and a few friends including former band member Damon Johnson and Warrant’s Jani Lane.

Along Came a Spider has elements of serial killers such as Hannibal Lecter, Son of Sam, Ted Bundy, Jack the Ripper, Sweeney Todd and Psycho’s Norman Bates with Alice himself taking the central part, acting out the murderer’s diary — challenging reality by Alice Cooper inhabiting the identity of a serial killer who imagines himself a spider. As he has in the past, Alice chronicles a classic battle between good and evil, with inevitable results.

“Evil should get punished,” says Alice. “It should never win. And that, to me, is what’s most satisfying. I may love Darth Vader when I watch Star Wars, but I feel relief when he finally gets what’s coming to him.”

Finally, though, it is beauty that defeats the beast, as the Spider falls in love with one of his intended victims in “The One That Got Away” and “Killed by Love,” before a surprise twist ending worthy of The Twilight Zone.

“Every album I’ve ever done has been guitar-driven rock & roll,” says Alice about Along Came a Spider’s heavy metal edge. “Danny Saber and Greg Hampton are both guitar players. They know all the classic Alice music and began referencing favorite moments before we even started to record. That’s when I first realized this could become a really special Alice album. I know my fans are going to love it.”

The seeds for Slash’s emblematic guitar solo on “Vengeance is Mine” were planted when Alice and Slash shared a dressing room at a NARAS event in L.A. earlier this year. Old friends who have known each other since 1986 and 1987 when a young Guns N Roses opened for Alice, and have appeared on each other’s albums occasionally, the subject of the new album came up.

“I told him to play what he wanted to,” says Alice. “And he came in and just blew it away. I had total confidence he would nail it. I wanted him to do what he does. And he did. It was a guitar hero moment.”

Speaking of Guitar Hero, Alice acknowledges that the game of the same name has introduced a whole new generation to his music. “Every nine-year-old I run into tells me, ‘I can play ‘School’s Out’ and ‘No More Mr. Nice Guy.'”

With a schedule that includes six months of every year on the road, Alice Cooper is bringing his own brand of rock psycho-drama to fans both old and new, and enjoying it as much as the audience does.

Known as the architect of shock-rock, Alice (in both the original Alice Cooper band and as a solo artist) has rattled the cages and undermined the authority of generations of guardians of the status quo, continuing to surprise fans and exude danger at every turn, like a great horror movie, even in an era where CNN can present real life shocking images.

With the Stones-like swagger of songs like “Catch Me If You Can” and “I’m Hungry,” Alice plumbs his roots in twisted garage-band rock & roll. “Before we recorded a single note as Alice Cooper, we were playing stuff we learned from the Animals, the Yardbirds, the Who and the Stones in bars,” he recalls. “There’s always a lot of their influence in my songwriting.”

Of course, if you ask Alice about HIS influence on so many artists, when you recount the story of how a young Johnny Rotten auditioned for the Sex Pistols by singing “I’m Eighteen,” or you try to list the many bands that have followed through the doors he opened, you might get told “don’t blame me for all of them!”

As he heads back out on the concert trail again this year now that Along Came a Spider is unleashed, Alice insists he’s still motivated to continue touring and making albums, as well as making time for such side projects as Cooper’stown (his Phoenix-based restaurant/sports bar), his Alice Cooper: Golf Monster book, and his Nights With Alice Cooper nightly radio show, syndicated domestically and worldwide on over 100 stations.

“If there’s nothing standing in my way, why not?,” he shrugs. “It’s what I love doing. And no one puts on a show as good as ours, musically and visually. I’m glad to be an elder statesman, and a healthy one. I look to guys like Ozzy, Iggy and Steven Tyler as fellow survivors. We’re carnivores, not dinosaurs. We eat whatever bands are in our path.”

With his influence on rock & roll long since acknowledged, there is little that Alice Cooper hasn’t achieved in his remarkable career, including platinum albums, sold-out tours and any number of honors and career achievement awards.

Along Came a Spider, the 25th album of a remarkable career with uncountable highlights, may require him to make more room on the mantelpiece for yet more hardware.”